“All the aircraft on the base have been taken out of action, it’s safe to say they are completely destroyed,” the employee, who was not named, told RIA.

The agency quoted Syrian television as reporting that a fire at the air base was continuing.

The United States fired dozens of cruise missiles at the Syrian base earlier on Friday from which it said a deadly chemical weapons attack was launched this week. The move drew sharp criticism from Russia. 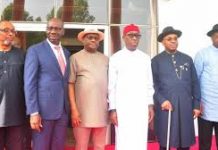 The mother of all challenge: Name one project initiated, completed in Nigeria by you,...