Home Features Opinion The first sign of a beating heart

Next week, perhaps at the Federal Executive Council meeting, President Muhammadu Buhari will receive the report of a three-man panel headed by Vice-President Yemi Osinbajo he asked to investigate two top officials.

His credibility flagging, President Buhari set up the panel last week to examine allegations concerning Babachir Lawal, the Secretary to the Government of the Federation (SGF), in the award of contracts under the Presidential Initiative on the North East (PINE).

Mr. Buhari also asked the committee to investigate the infamous discovery of over N13 billion in various currencies in a private luxury apartment in Lagos.

The other members of the panel are the Attorney-General of the Federation and Minister of Justice, and the National Security Adviser.

To facilitate the investigations, President Buhari suspended from office Mr. Lawal, as well as Ayodele Oke, the Director-General of the National Intelligence Agency (NIA), who had declared the money to be his agency’s.

On the ethical warfront, this is the first clear sign of a beating heart in the president since he assumed office.

The key question is now whether Buhari is man enough to see to the prosecution of the SGF.  The job of the Osinbajo Panel is to make that specific recommendation, following the facts, and let the chips fall where they may.

Mr. Oke’s case is equally historic: N13 billion found in cash buried in seedy stories by Mr. Oke, who was last seen banging his head on the gates of Aso Rock as his worst nightmare unfolded.

According to him, the N13 billion was approved for his agency for “covert” operations by President Goodluck Jonathan in February 2015.  It has however since come to light that what his agency actually received on that occasion was nearly $300 million.

According to The Cable which broke that part of the story, the funds came from an NNPC subsidiary.  It opens a whole new window into Pandora’s Box.

But N13b is what, for at least another week, indisputable.  N13b in cash not in a bank account.  In various currencies, not just in naira; in a private, dubious apartment, not an office.

It is of some reassurance that among those testifying before the panel will be the EFCC boss, Ibrahim Magu.  By now he has a record of all persons buried or missing.

Yes, Magu, men do cry, and this is his opportunity for you to weep openly.  Tell your full story, which is a tale of many interlinked and bewildering parts.  Hurt the ears of the panelists the way the story has hurt yours.  You may not get another chance.

The panel will also interview Mr. Goodluck Jonathan, who allegedly approved an NIA loot.  For some reason, he also decided that local covert operations be conducted not just in cash, but also in foreign currencies.

The former President will also have to talk very fast because the “NIA funds” bear a striking similarity to the $2.1 billion that former NSA Sambo Dasuki disbursed generously into political, partisan non-security hands in Mr. Jonathan’s name.

Clearly, the Osinbajo’s panel will be shoddy if it does not, given the circumstances, ask the former president to specify any similar funds or approvals he approved.  It is Mr. Osinbajo’s opportunity to protect his own image as a transparency-crusader, lawyer and Christian by asking this question.

It is also important because one assumes he will want to defend his name.  Jonathan’s authoritative response will help cross-check the tales of all those who claim to have acted, or erred, in his name.

It is common knowledge that during Mr. Jonathan’s tenure, Coordinating Minister & Minister for Finance Ngozi Okonjo-Iweala treaded carefully—that is, slowly—in disbursing funds.  Mr. Jonathan is known to have responded to the complaints of some officials by having Mr. Dasuki grant instant cash to them.

On this point, Mr. Jonathan will, I am certain, be happy to look at the former NSA’s cash book and certify which disbursements he authorized.  It would then be important to reconcile those extraordinary disbursements with those that were subsequently released by Mrs. Okonjo-Iweala for those offices.

In this connection, it is important to remember that last year, Buhari biographer John Paden said he had learned from Buhari that as President, Mr. Jonathan often requested and used illegal “off-budget funds.”  According to that account, Mr. Buhari has evidence of this in certain letters written by Mr. Jonathan.

For two years, Mr. Buhari has sadly “fought corruption” by blaming his predecessor but without asking him any of the obvious questions.  For Buhari to continue to do that would mean he has adopted the stealing-is-not-corruption philosophy.  This is an opportunity to correct that.

In other words, next week should be an exciting one for all genuine transparency interests in Nigeria when Buhari receives the report.  But what follows?

Everyone knows President Buhari has been disappointing in office in dealing with allegations concerning his officials, and for failing to name corrupt persons.

Will Mr. Lawal be treated differently?  In a sense, he already has: his case should have been referred to the EFCC months ago, not the highest-level presidential treatment he is now getting.  If he is found guilty, will he be prosecuted, or will he be let go with an apology, his baban riga unruffled?

It is also of interest that the president gave the panel 14 days for an assignment that ought to last no longer than three, or perhaps about seven, should Mr. Magu arrive with a library of documents.

But what happens after 14 days?  One possibility is: NOTHING.

Remember: in May last year, Buhari’s government, “embarrassed” by the second consecutive disastrous report on Nigeria by the Global Fund, made some fire-eating speeches.

The Fund’s first report in 2010 revealed that Nigerian officials and organizations had embezzled nearly $500m meant for fighting HIV&AIDS.  Worse still, Mr. Jonathan’s government failed to honor a promise to prosecute those who were implicated, and The Fund scaled down its commitments to Nigeria.

Still, in the 2016 report, it reported continuing abuses, including wide discrepancies between drugs ordered and delivered; $20m paid to suppliers without confirmation of delivery; and $7.65m in unsupported expenditures.

In response, the Buhari government, feigning concern just like its predecessor, set up various investigations to make the international community happy, the first one by the EFCC.

The second was headed by the Health Minister, Isaac Adewole; and the third by the Auditor General, Samuel Ukura: two panels set up by Mr. Lawal, the SGF.

The fake Adewole and Ukura panels were to submit their reports within four weeks.  One year later, nobody has been identified or punished.

That is why the gleeful sniggering and giggling on American television last week as they showed videos of the cash haul in an apartment in Lagos was painful, but understandable.

But a poor Osinbajo report, or response to it, will be no occasion for giggling, especially at home.  It will mark the end of any pretensions to serious governance. 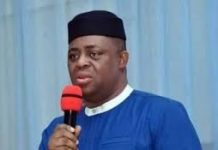