The one hundred and four days of President Muhammadu Buhari medical sojourn opened
the fault lines of the nation and a clear advertisement that ours is pretending to
be a nation. For those days, the ship of the nation was clearly adrift with an
absentee president and a nominal acting president that could not deliver effective
leadership because of some deep rooted cabals and interest group. In fact, the
nation was on auto pilot and the information managers did a poor job about the
president health status. As you read this piece, Nigerians are yet to be told the
illness of the president and how much the nation has spent in treating him.
Therefore any talk about the buy- made- in- Nigeria product campaign of the present
administration is shattered by the medical tourism of the president.
The less than seven minutes broadcast of the president, failed to address the
pressing issues of the moment- restructuring and fiscal federalism. Furthermore,
the hard stance of the president in his words `the unity of the nation is settled`
is a clear indication that the president is very far from the reality of the
moment. He has to climb down from the high horse and address the needs of the
people especially those of the south. There is too much distrust and the
perception of his administration in some quarters is that he only ministers to the
needs of the north. That is very far from his mandate, and the oath of office and
that of allegiance that he swore to.
Let it be said over and over again that ours is a limping federation with clear
marks of unitary system. Let those with plastic ears continue to delude themselves
that our federation is working. The unity of the nation cannot be settled where
there are clear evidence of citizens and subjects in one entity. Majority of
southerners and some northerners with patriotic hue are of the firm conviction of
the need of restructuring and entrenching the ethos of federalism. You may not
like the ill mannered nature of Nnamdi Kanu of Independent People of Biafra
(IPOB), his caustic tongue and uncouth language. But it is the symbol of the
sickness that plagues the nation. Similarly, you can condemn the bombing of
pipelines by the Niger Delta militants; the message is that the goose that lays
the golden egg is neglected.
In well organized federal country, the local councils are not part of the
federating units. Even our 1999 constitution says that the federating units shall
be the states and the federal capital territory. But in another clause, the local
councils are listed in the constitution. This is clearly an aberration and the
national legislators who are supposed to correct this anomaly via constitutional
amendment are idling away by simply contemplating their political navel. These are
grave signs that the nation is drifting and those who are supposed to stop the
drift are more interested in cornering the wealth of the nation for self, family
and their cronies.
There are too many problems plaguing the nation and it shows that both the
executive and the legislators at the federal level have lost grip of effective
governance. The Fulani herdsmen are decimating the nation, killing people with
effortless ease and the government pretending that everything is normal. There is
still Boko Haram bombing the country yet the government live in the denial of the
existence of the terrorist group. There are too many agitations for self
governance with IPOB getting the infamous position as number one. There are too
many people running their mouths with hate speech and giving ultimatum to other
Nigerians to leave their regions. Kidnapping and armed robbery are now the
signature tunes of the nation with the security operatives overwhelm. Add the
unemployment scourge and the harsh economic down turn, the nation is just waiting
to explode or at best acquiring the toga of a failed state. There is little or no
governance at the state level where governors see the payment of salaries as one
of their achievements. The local councils have been so strangulated that they only
exist by their signboards. The ills of the nation are just too numerous with an
uncaring and indifferent government looking the other way.
But this piece must give kudos to the civil society groups and the press for
always pointing out the faults of these men in the corridor of power. The truth
must be said. That Nigeria is a country blessed by God but plagued with
inefficient and indolent leadership. The manner of recruiting leadership in the
nation is seriously flawed. There are few patriots and unfortunately these are
outside the political circle or outside governance. This attitude must change and
that men and women of courage and transparent honesty should enter the political
arena and salvage the situation. The darkness is imminent and it would be a great
tragedy for Nigeria to fail as a nation and disintegrate into many states. It is
not too late for the Buhari administration and the national assembly to retrace
their steps and do what is needful for the benefits of all Nigerians and
generations to come. Restructuring and institutionalization of fiscal federalism
could douse the flames of agitations and the raging political furnace. To borrow a
leaf from the eternal lines of John F Kennedy: Those who make peaceful change
impossible, made violent change inevitable. I rest my case. 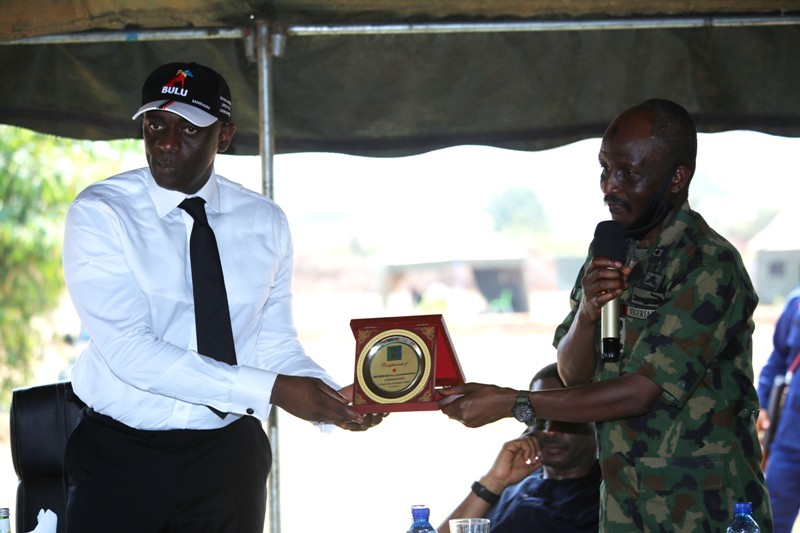 Portrait of the tiger Ambode rode

Your nepotism pushing Nigeria to the brink, Umar warns Buhari