President Muhammadu Buhari of Nigeria, center, arriving in Abuja on Saturday. He returned to the country after more than three months in London for medical treatment. Credit Sunday Aghaeze/Nigeria State House, via Associated Press
LAGOS, Nigeria — Throngs of cheering people lined a freeway in Abuja, Nigeria, over the weekend to welcome a countryman who has spent much of 2017 overseas: the president.
President Muhammadu Buhari arrived in the capital on Saturday, and the nation breathed a collective sigh of relief that its leader had returned from London, where he had spent more than 100 days receiving treatment for a mystery illness. It was his second medical leave this year.
With the president abroad and little information available about his condition, some old wounds in the country have begun to reopen.
“I am so glad to be home,” Mr. Buhari said in an address on Monday.
But he returned to a country whose oil-dependent economy is in turmoil and where the Islamist militant group Boko Haram has been escalating attacks on the military and civilians in the northeast. Millions are suffering from a humanitarian crisis set off by the war, which is in its eighth year.
Fights between nomadic herdsmen and farmers in the middle of the country have left hundreds dead. A spate of kidnappings for ransom has plagued some parts of the country. Some of the president’s political opponents have called for secession.
Much of Mr. Buhari’s short speech on Monday seemed directed at those rivals, some of whom engaged in a bloody civil war decades ago to create an independent republic of Biafra in the southeast. The president singled out foes who “have crossed our national red lines by daring to question our collective existence as a nation. This is a step too far.”
“Nigeria’s unity is settled and not negotiable,” he said. “We shall not allow irresponsible elements to start trouble, and when things get bad they run away and saddle others with the responsibility of bringing back order, if necessary with their blood.”
Mr. Buhari’s long absences for an illness that officials have refused to identify have created tensions in Nigeria, setting off protests not only from separatists in the south but also from poor residents of oil communities who want a better life and from ordinary citizens who wanted Mr. Buhari to either come home or resign.

While the president was away, Vice President Yemi Osinbajo was officially in charge. By most counts, he exercised steady and effective leadership, presiding over important economic conferences, visiting southern regions in economic turmoil and traveling to the northeast to promote aid for war victims.
Over the weekend, Mr. Osinbajo sought to assure the public that the president was ready to tackle Nigeria’s pressing issues, saying Mr. Buhari was “roaring to go.”
“The recovery and the recuperation of the president is in some sense symbolic of the recovery of Nigeria,” Mr. Osinbajo said on Saturday.
In his speech on Monday, Mr. Buhari made only passing reference to the economy, now in recession. He seemed more focused on calming political disputes that had festered while he was away.
Concerns about the president’s health have prompted early speculation about the ticket for his party, the All Progressive Congress, in a presidential election set for 2019. In Nigeria, informal agreements call for the presidency to alternate after two terms between a candidate from the predominantly Muslim north and one from the Christian south. Under the terms of the Constitution, if Mr. Buhari, a northerner, were to leave office early, Mr. Osinbajo, a southerner, would take over until the 2019 election. But disputes could escalate if northerners argue their term was cut short.
While managing the political jockeying, Mr. Buhari must also face a war against Boko Haram that worsened in his absence. After months of losing territory, the militant group has staged regular suicide bombings in markets and camps for displaced people, and attacks against soldiers and military convoys.
Mr. Buhari vowed to escalate the campaign against Boko Haram.
“We are going to reinforce and reinvigorate the fight not only against elements of Boko Haram which are attempting a new series of attacks on soft targets,” he said, but also “kidnappings, farmers versus herdsmen clashes in addition to ethnic violence fueled by political mischief makers. We shall tackle them all.”
Mr. Buhari met with dozens of girls in May who had been released after being kidnapped from a school in Chibok in 2014 by Boko Haram militants. But many of the other girls from Chibok are still missing, leaving a major promise of Mr. Buhari’s presidency yet to be fulfilled.
Mr. Buhari’s war on corruption carried on while he was away. Nigerian and United States Justice Department officials recently seized millions of dollars’ worth of property owned by a former oil minister and other officials accused of graft.
In particular, Nigeria’s Economic and Financial Crimes Commission said it had traced nearly half a billion dollars’ worth of real estate and cash from Diezani Alison-Madueke, the oil minister under the previous administration. Much of the property, which includes penthouses, a 13-bedroom home and entire apartment buildings, had been bought through shell companies, the commission said.

But the president has yet to fix the nation’s crumbling roads and other infrastructure, or to curb power outages that make life miserable for those who do not have expensive generators. He must also try to calm frustrations in the oil-rich south, where residents have insisted for years that their impoverished communities do not receive a fair share of oil revenue.
The president’s long absences fueled grass-roots protests calling on him to return to work or resign. Last week, some demonstrators in Abuja were attacked.
Charles Chukwuemeka Oputa, an entertainer who is the movement’s leader, said his group of no more than a dozen had been outnumbered and that some protesters had been injured.
“It was like trying to kill a fly with a sledgehammer,” he said.
It was unclear who the aggressors were — some blamed thugs from a nearby market, others blamed the president’s supporters. Mr. Oputa said the aggressors were police officers armed with dogs, water cannons and tear gas.
Rights activists denounced the violence, saying it was a sign of the palpable anxiety in the nation.
“That attack should be condemned by any right-thinking Nigerian,” said Richard Akinnola, chairman of the Center for Free Speech in Lagos. “We can disagree on our positions without resorting to violence.”
• Source: New York Times 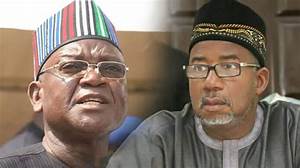 Be tools for smooth conduct of 2018 polls, Okowa urges Batch B Corp members