Delta State Governor, Senator Ifeanyi Okowa has declared open the three weeks Orientation Course Exercise for the 2017 Batch B Stream 1, Corps members, deployed to Delta State at the NYSC orientation camp Issele Uku.
Okowa who was represented by his deputy, Barrister Kingsley Otuaro, charged the corps members to be guided by diligence, discipline, and patriotism while performing their primary assignment.
The Governor urged them to participate actively in all the camp activities, also maintained that government would continue to sustain the scheme in the state and assured them that their welfare and protection were guaranteed throughout the service year.
The Governor advised them to justify government high expectations of their conduct during the period, by conducting themselves well all through their service year.
Governor Okowa congratulated them for successfully completing their academic studies in the various institutions of higher learning across the globe.
The State Chairman NYSC Governing Board, Hon Ovie Agas expressed gratitude to the Governor Okowa for fatherly support and assistance to the NYSC scheme in the state, Hon Agas who was represented by the functioning Permanent Secretary, Cabinet and Administration Mr Godwin Idama advised the corps members to emulate the exemplary qualities of their predecessors and also integrate fully into the communities of Delta State which are safe, peaceful, and hospitable.
A total of 2,713 corps members were administered the oath of allegiance by the State Chief Judge, Justice Marshal Umukoro represented by Justice Christiana Ogisi. 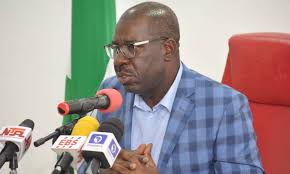