Protest over alleged imposition of chairmanship candidate by the leadership of the Delta State Chapter of the Peoples Democratic Party (PDP) came yesterday from the Ijaws of Egbema in Warri North Local Government Area who contracted the claims of the party Chairman, Olorogun Kingsley Esiso that there was no candidate imposition in the local government.
Shortly after unveiling the party’s chairmanship candidates and their vice chairmen to the Press and in answer to a journalists question, Esiso said there was no imposition of candidate in Warri North Local Government, one Prince Lucky Binikuro from Egbema, who was sitting at the rear of the PDP secretariat hall, stood up to disclaim the PDP chairman’s position saying: “There was no primary held to determine the authentic candidate of popular choice. Isaid it; nobody gathered together to conduct a primary. It is an imposition by former Governor Emmanuel Uduaghan, Esiso whose mother is Itsekiri and Wiliki Tosan, current PDP chairman in the local government.”
Earlier, a contingent of protesters led by Barrister Ugha Kurumah, Hon. Dickson Asoki, a leader of thought, and Francis Abulu, secretary, Egbema Justice and Equity Forum took time to speak to journalists amid placard carrying protesters seeking fairness, equity and the enforcement of the principle of rotation of political office which they said is the principle that produced Senator Ifeanyi Okowa today as governor of delta stae.
Barrister Kurumah said: “We are the Ijwas of Egbema Kingdom in Warri North Local Government Area. We are doing this peaceful protest to inform everyone that since the creation of the local government 26 years ago, it is the Itsekiris that have been producing the chairman. We want a political solution to the matter that will ease the institutional slavery of the Ijaw of Egbema kingdom. It is discrimination against the Ijaw people in Warri North.”
He continued: “There is political abracadabra going on in Warri North. Things have not been done normally here. There is secret imposition of an Itsekiri. This marginalization has always been so. This time, we are going peaceful, but we want the wrong to be righted,” Kurumah said.
For Dickson Asoki, a primary election to determine who emerges as the people’s choice for chairmanship candidate of the PDP should be conducted democratically. They said a negotiating process is on, then if a negotiating process is on why imposing a candidate when the process of negotiation has not been concluded?”
Mr. Francis Abulu said: “Governor Okowa who came to power through rotation, should not close his eyes to the injustice that has made it impossible for that same rotation principle to be applied in Warri North. It is lamentable that Dr. Uduaghan who became governor on the basis of power shift and rotation could close his eyes to the injustice being done to the people of Egbema.”
Some of the placards read: “Gov. Okowa bring justice to Egbema Ijaw people of warri North;” “Okowa act now. Warri North , it’s Egbema’s turn, Justice.” “Egbema people are against imposition in Warri North. Stop the 26 years of marginalization in Warri North.” “Stop 26 years injustice in Warri North LGA against Ijaw.”
Meanwhile, the PDP Delta state Chairman, Olorogun Kingsley Esiso yesterday introduced to Deltans some of the PDP candidates for the January 2018 chairmanship elections and their vice chairmen. The candidates included old and former chairmen including immediate local government chairmen that were brought back and recycled. Others are children of notable chieftains of the party and a sprinkling of fresh party loyalists. There were at least three women, one as chairmanship candidate who is being returned as candidate, and two who are vice chairmanship candidates.
Esiso who also unveiled the time-table for the party’s local government campaigns, said the PDP in Delta State is prepared to ensure victory for its candidates. “We believe in our ability, and capability to win the elections.
“We are also falling back on the achievements of the PDP led government of Senator Ifeanyi Okowa in the state. We believe that our governor has achieved enough. We want to encourage other parties to come out and campaign on the field. We intend to meet the opposition parties in the field,” Esiso said. 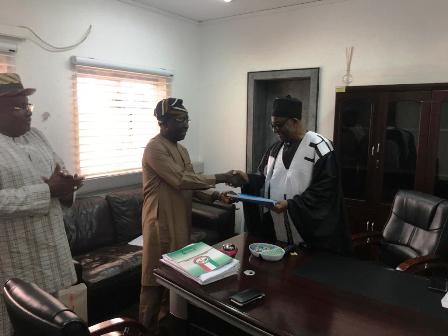 ‘I did not receive money for 05 Initiative’, says Delta First Lady; declares no...