Chief Peter Nwaoboshi is a dogged politician that has been able to position himself as one of the voices in the Senate where he is representing the people of Delta North,according to his Special Assistant on Media, Hon. Andie Onyemeziem, who also reeled out efforts of the senator at improving the lots of members of his constituency in the two years of his representing tham in the senate.

Onyemeziem who spoke in a chat with journalists in his office in the Senatorial Office of Senator Nwaoboshi,described Nwaoboshi as a go-getter, and one who is a greatly misunderstood by persons who see him from afar because they have not come close to him.
“If you look at the few shakers there in the senate, you will know that he is one of them. He is a go-getter, a strong willed man who will stop at nothing to get what he promised to the people of Delta North. And one major promise he made to the people of Anioma who he is representing at the senate is that when he returns he wouldpoint to the people the things he has done. And so far,so good,” Hon. Onyemeziem said.
While observing that as a law maker that is not a member of the executive, Senator Nwaoboshi can only lobby toattract things tohis constituency, pointing out that among the numerous projects done by Senator Nwaoboshi include: the Ebu-Abuja Road, which was one of the major roads that was repaired and asphalted when he became senator. He also helped in the reconstruction of Ogbe Ozomo-Amachai Road at Okpanam. The construction of Oponta Road, Ibusa that was asphalted . The is also the resurfacing of Kefas Road,Ibusa,the establishment of the skill acquisition Centre worth N600 million, gave two ambulance buses,one each to the General hospitals at Ibusa and Agbor.
Hon.Onyemeziem continued; “Nwaoboshi alsoinfluenced the siting of another skill acquisition centre at Kwale in Ndokwa West LocalGovernment Area, the construction of Achalla-Ibusa-Asaba Road, and the Ekereuche Road at Ogwashi-Uku.
“Besides,he influenced the inclusion of Ndokwa people in the Federal Government’s Amnesty programme,where majority of the youth were already trained,” the media aide said.
As a compassionate person, Hon.Onyemeziem said also took time to assist the people of his constituency by giving out financial assistance to 784 people in the nine local governments that make up Delta North Senatorial Disterict. He gave each receipirnt N50,0000,amounting to a total of N39million. It was in fulfillment of someof his election promises.
InDecember 2016, Onyemeziem revealed that Senator Nwaoboshi held a mega empowerment project in which he gave out nine tricycles,98 motor cycles,one to each of the 98 wards. This is in addition to 98 sewing machines, nine oil milling machines, 1,000 bags of rice and N25,000 to 10 people in each of the 98 wards that make up Delta North Senatorial District,all totalling N24,500,000. He also gave out N25,000 each to34 physically challenged persons in the District.
Onyemeziemsaid: “Senator Nwaoboshi has alsoinstituted the Obi Francis Nwaoboshi Foundation, which he has since inaugurated. It will among other things cater for the needs of the less privileged .
As a law maker in the Senate, Senator Nwaoboshi has many bills and motions that were sponsored by him. They include the following:
(1) A Bill for an act to amend the public Officers Protection Act,LFN,2004(2014)~Passed 2nd reading
(2) A Bill for an Act to Promote and regulate the Real Estate Sector,2015,(dated 8th December, 2015)~for 2nd reading.
(3) A Bill for an Act to amend Code of Conduct Bureau and Tribunal Act,Cap C15,LFN,2004(dated 22nd December, 2015)~passed into law
(4) A Bill for an Act to Repeal Local Government Act(Cap 8,1976)~2016(dated 18th October, 2016).
MOTIONS MOVED:
{¡} Urgent need to investigate the activities of Petroleum Equalization Fund Management Board and to determine it’s relevance in view of present government policies on deregulation of petroleum products(Dated October 18th,2016).
{¡¡} Difficulty and delay in processing Land documents in Nigeria (dated 12th January, 2016).
{¡¡¡} Closure of National Arts Gallery in Abuja(dated January, 2016).
{¡v} A Motion for Finance Ministry to Immediately release remaining N15Billion in 2015 Budget to Amnesty Office for proper funding and ensuring the survival of Niger Delta Amnesty Programme(April,2017).
Answering a Reporter’squestion on his boss, Hon.Andie Onyemeziem said: “A good leader cannot run away fromcriticisms.Sometimes, it helps in repositioning oneself. But unfortunately, someof the criticisms are subjective.”
Calling attention to the fact that Senator Nwaoboshi is a member of the opposition party, a factor that can weigh heavily against easy functioning,yet because of his doggedness he has been able to position himself as one of the voices in the Senate.not easy to influence so much tohis senatorila district.Yet, he has succeeded for two reasons..
Said Onyemeziem: “First,in his determination to make a difference.Two, his ability to fuse himself intothe mainstream of the NationalAssembly politics. Of course,we’ve had Senatorsbefore him,but Senator Nwaoboshi’s activities and impact are right now in the people’scourt to judge.”
He said Senator Nwaoboshi is a misunderstood person,but that the reasons are not far fetched. “One of which is that most of the people who overtly criticised him have never even come close to him. Because Senator Nwaoboshi isone of those highly placed persons that could come down tohis locality anytime,any day,to dine with his people. He is a grassroots person. In other words, those who criticise him see him from afar because they are not close to him. He is an enigma,” Hon.Onyemeziem derclared. 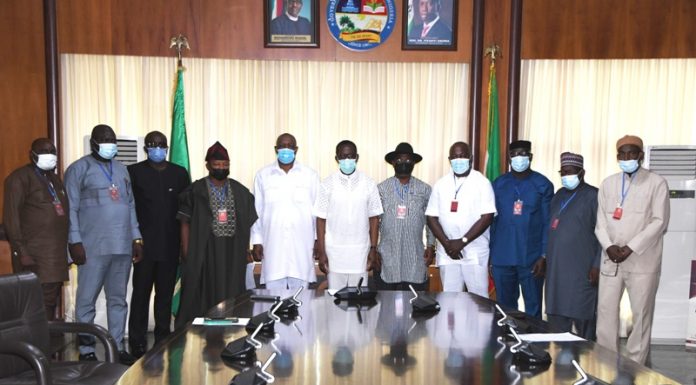