The Badagry division of the All Progressives Congress (APC), on Sunday endorsed Lagos State Governor, Mr. Akinwunmi Ambode for a second term in office.

Mr Rabiu Oluwa, chairman of the division made the declaration because of what he described as “Ambode’s unprecedented, all inclusive governance that had scaled up infrastructure development”.

Oluwa said that Ambode was adopted as its sole candidate because of his achievements in the past three years.

”Gov. Ambode’s unimaginable performance and commendable zeal for developmental projects have been visible in every nook and crannies of the state, especially in Badagry division.

”In this division, we benefitted in the programmes and policies of Gov. Ambode led-administration. This is why we are declaring out support for his re-election so that he can continue to make our division and Lagos an enviable state, ” he said.

Oluwa urged residents to be part of the Continuous Voter Registration, CVR, exercise being conducted by the Independent National Electoral Commission( INEC)., adding that their voter’s card remains their weapon with which they can use to support continuity of good government

” You have to register as a voter to be eligible to vote. We must take it seriously to make sure our names are in the voters register. Go to the polling centre to collect your PVC.

Speaking on behalf of the LGA and LCDA Chairmen, Mr Abdul-Fatai Ajidagba of Ajeromi-Ifelodun said that Ambode’s performance in office had made the state a reference point in the comity of States in Nigeria.

”In our division too we can see the records, the Lagos-Badagry Expressway, Badagry Deep Sea port and other road projects. These are some of the things that placed the governor ahead of his contemporaries nationwide, ” he said.

Lukman Ajibola, Youth leader of the division said that youths of the state are soaring higher because of Ambode’s youth friendly government and called for all hands to be on deck in ensuring that the governor was re-elected.

Leader of the Arewa group in the area, Muhammed Sani Yaya who led members of the Hausa community to the event said his people supported the move to endorse the governor for the second tenure ticket because of his hardwork and love for all Lagosians irrespective of their tribe or religion.

He said the governor has proven himself to be a detribalized Nigerian and highly focused leader who is committed to the growth of Lagos.

The Igbo group in the area also came out to support the joint endorsement of the governor.

Chairman of the Igbo group in the division Barrister Uche Ubochi commended the governor for his leadership quality, noting that the governor through hard work has made Lagos state a standard for measuring development in the country.

”Population is what drives election and Badagry division has the population, therefore, this endorsement means a lot to the governor.

”The endorsement will motivate him to continue to prioritise the growth and development of the state as well as continue making the needs of the residents top issue, ” she said. 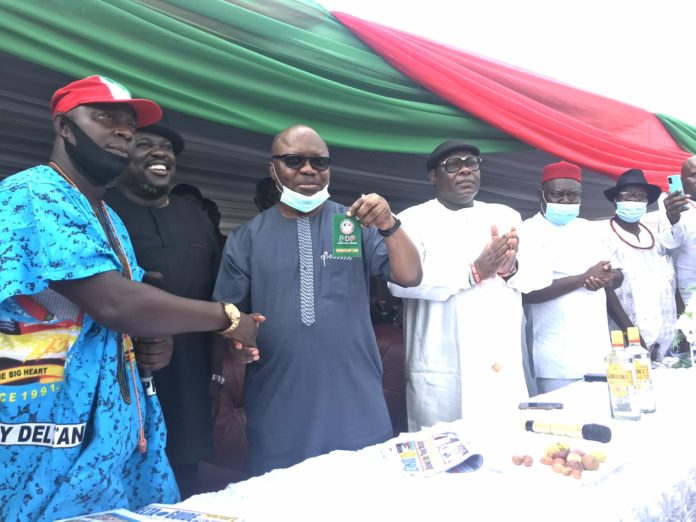