I’m really surprised any progressive person can oppose state police. Nigeria will remain in the dungeon of violence and social misery as long as we condemn the fate of policing every village and town to the hands of those alien to the values and custom of those territories they have been mandated to guard.
There are very wrong assumptions by those who oppose state police. Let us take them one by one.
· That police will be abused by state governors: This is patently false and stands logic on its head. State Governors can equally abuse Federal Police. 30,000 state police invaded Osun during the last governorship elections, 25,000 invaded Ekiti. They killed and maimed. In Rivers, Federal Police was used by the state governor. So what are we talking about?
· State Police will be like SEIC: Policing is not about elections alone. Elections come only once in 4 years while policing is a day-to-day and minute-by-minute affair. Policing is about the protection of the sacred institutions of traditional societies, it is the protection of ancient values, it is about peace-building and conflict prevention in every society. Most of the conflict in every society are inter-personal or between the state and individuals but most crimes are between the individual and the society whose beliefs are violated. In any case, there is no fundamental difference between SEIC and INEC.
· Values and Norms: It is wrong to ask someone from Abia to go and police Zamfara and vice versa. He is likely to find the customs and traditions appalling. A policeman cannot do diligent prosecution when he does not believe in the values upon which the state derives its laws, especially laws based on age-long tradition and heritage. This is one of the reasons why there is so much conflict and instability in Nigeria. Crimes are universal but the responses to crimes in every society differ and you cannot have a national or universal mechanisms for crime prevention or for prosecution of suspects.
· Investigations will be compromised: Federal Police have failed to resolve many high profile cases because of undue intervention of the Federal Government. We have seen what is going on in all the states. Chief Bola Ige was killed, till date, we have not been able to find the killers, the Igwe Barnabas family, the killings of Chief Dokibo Amasiori, the disappearance of Chibok girls.
· Federal Govt more responsible: It is counter-reasoning to think that the Federal Government is more benevolent than the state government. The Federal government is a distant force while state governments are direct products of the people in traditional communities. There is no justification to assume that the Federal Government is on a higher moral ground than state governments. Corruption takes place more at Federal than state institutions. Federal Govt in Nigeria have been quite more brutal because they send foreign policemen to kill and main people they view with contempt and deride simply because those who carry out such atrocities are not blood bound to the victims. Violence inflicted on a society is likely to come less from those who are traditional stakeholders in that society.
· If state police will be abused, it is based on the lessons we think they will continue to learn from the Federal police. State Governments indeed are the institutions that make impact on the lives of the ordinary Nigerian not the bogus and inept Federal Govt.
· Break up of Nigeria: That State police will lead to break up is counter-productive. In the real sense, it is the lack of state police which continues to fuel repression, usurpation the liberty and rights of the people that has compelled most Nigerians to seek illicit weapons to defend themselves, seek revenge or commit crimes.
· Has the Federal police failed? Yes. In reality, in Nigeria, policing has become an individual affair: You have to get a maiguard, either as a community or in an estate or as an individual. Majority of the so called Federal Police have been privatized and end up guarding individuals, politicians and private organisations. Policing will be more effective if we realize that security is not a property of the government but a property of the people themselves; the people must be involved in policing. You cannot protect me without my knowledge or my input. In Nigeria, we have defined security as a gift from Federal government without the input of communities to be protected. This has created the perception of security as government business and not the business of the people. For successful Policing, officers must have psychological, spiritual and sociological knowledge of the community they police. What should matter to us is what form of state police do Nigerians deserve and that should be spelt out in the constitution so that the State Police will not be tied to the apron spring of any governor but rather controlled by an organ which is made up of representatives of credible institutions with checks and balances. Nigeria cannot continue to twist the fundamentals of Federalism in order to suit the primordial interests of a certain group that wants a moribund system preserved and nurtured for personal gains. The Nigerian Police force is a multi-bilion naira shithole of fraud and graft, the main reason some people want the status quo maintained. It is time Nigeria shrinks or sinks. 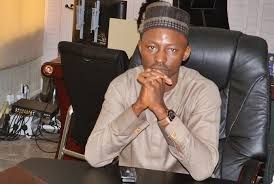 Delta Govt sets up persons with disabilities in vocational skills; get starter packs

Elumelu bags Legislator of The Year 2019 award; pledges to continue to Work for...