The green light for Governor Ifeanyi Okowa of Delta state to return to Government House, Asaba, for second term in 2019 shown brighter today, 9/6/2018, following an overwhelming endorsement given to him by the people at an impressive affirmation political rally by Delta South senatorial district.

The second term nod for Okowa, which was also effectively backed by former Governors led by Chief James Ibori, was made on behalf of the Urhobo, Ijaw, Itsekiri and Isoko ethnic nationalities of Delta State at a grand rally organised by the Delta South chapter of the Peoples Democratic Party (PDP) at Oleh, in Isoko South Local Government Area of the State.

Speaking, former governor Uduaghan said: “All the ethnic groups in Delta South have said they want you (Governor Okowa) back in 2019, so, there will be no primary election for the governorship position, we are going to work very strongly for Governor Okowa. ”
Alaowei Bozimo who was the Chairman of the occasion had in his speech, said: “The Ijaw nation speaks always with one voice, the Ijaw people are totally committed to the divine ticket of Governor Okowa and Deputy Governor Otuaro, you don’t change a winning team, but the bottom line is that we must all have our Permanent Voters Card (PVC).”

Dr. Oritsejafor said: “Those of us from Itsekiri, see our Governor as a builder of peace, roads, the youths, infrastructure of all kinds and we will vote for him again in 2019.”
Chief Emmanuel Okumagba who spoke on behalf of the Urhobos in Delta South, reiterated, “We are here to show solidarity with the works which Chief Ibori started, Dr Uduaghan continued with it and Governor Okowa consolidated on the work. If Chief Ibori spent eight years in office with the slot of Delta Central and Dr Uduaghan did eight years for Delta South, we believe Governor Okowa deserves another four years in office. Governor Okowa should complete eight years in office.”
While Chief Ogba on behalf of Isoko people stated that “Isoko people will deliver massively for Governor Okowa in 2019,” Chairman of the PDP in the state, Chief Kingsley Esiso commended the people of Delta Central for the massive mobilization of people for the rally.
Elated Governor Okowa in a brief speech, said, “This is more than a political rally in a state, it is a national rally, Delta South is always reliable and we know there is no fear, PDP is a house built on solid rock, it cannot collapse, there is peace in Delta State and I must thank all Deltans, especially, the youths for giving peace a chance.”
He reassured all aspirants for elective positions that the PDP in the state will provide the enabling environment for free, fair, transparent and acceptable primary elections. 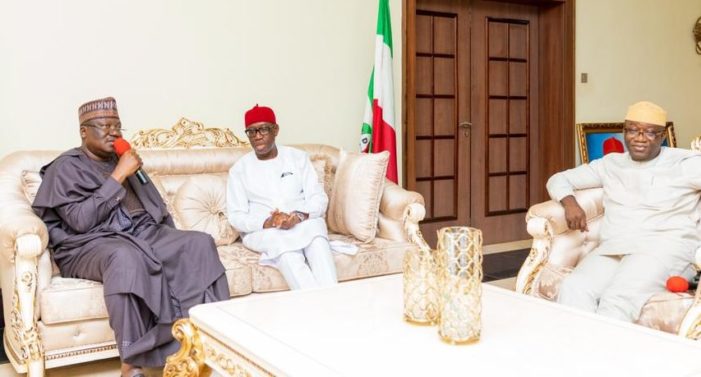 Lawan, Saraki, Ihedioha,Fayemi, other felicitate with Okowa at 60