The Delta state chapter of the Peoples Democratic Party (PDP has described the All Progressives Congress (APC) as a drowning party in its last lap into oblivion.

The PDP made the assertion when it strongly dismissed claims made by the All Progressives Congress, APC in the State, suggesting that the administration of Governor Ifeanyi Okowa has allegedly misappropriated allocations accruing to the State from the Federal government in projects and policies that have little or nothing to improve the lot of Deltans in the past three years, even as it has described the allegations as the futile efforts of a drowning party gasping for survival by clutching on to falsehoods and misinformation as its final straw of hanging on to relevance.

The State Publicity Secretary, Dr. Ifeanyi Michael Osuoza, handed down the verdict while responding to a press statement titled “Delta State Government should be truthful to Deltans about the State of Finances of Delta State,” and issued by one Barr. Ogheneluemu Sylvester Imonina, who the PDP Scribe described as the factional Publicity Secretary of APC in Delta State.

Dr. Osuoza’s rebuttal of the allegations raised by the All Progressive Congress was contained in a rejoinder titled: “Delta APC is struggling against imminent drowning”, in which he categorically stated that the claim of the APC that, “In recent times, there have being (sic) (been) unnecessary and unfounded complaints by the government of Delta State, led by Sen. Ifeanyi Okowa about the poor state of finances of the State and these barrage of complaints is being orchestrated by the government to justify his lacklustre performance in infrastructure,” is not only incoherent and baseless, but also an imaginary scenario created from the illusionary mindset of a drowning political party that was completely out of touch with the realities on ground in Delta State

According to Osuoza, “the Delta State PDP is not surprised by what the APC faction has come up with; it is an attempt to want to convince the people and its disenchanted supporters, who are decamping secretly in their numbers to the more viable PDP in the State, that it has seemingly woken up from slumber”.

The Delta PDP spokesman further noted that: “Just for the sake of rebutting the unfounded claims of the APC faction, it is important to inform the good people of Delta State that at no time ‘in recent times’ did the hard working and project delivering Governor Ifeanyi Okowa complain about the so-called ‘poor state of finances of the State.’ Rather, the good people of Delta State are quite impressed with the astute management of the State’s finances by Governor Okowa, who has not only brought the State out of a crippling recession caused by the inept and clueless government of the APC at the centre, but has equally plugged all loopholes and raised the internally generated revenue base of Delta State to a whooping =N=51 billion annual record in just three years of his administration.”

Osuoza categorically stated that, “Our amiable Governor, Senator Ifeanyi Okowa has painstakingly and conscientiously made it a point of duty to inform Deltans regularly of the good turn of events in the area of the financial fortunes of the State, by announcing it at several fora, including his quarterly media briefings with journalists in the State, as well as in all the second phase of his engagements with Deltans during his recent town hall meetings with the people in the various local governments and indeed through the Commissioners and heads of MDAs in the State as they present their scorecards in the regular Ministerial Press briefings which the Ministry of Information has been organizing every year since 2015”.

The Delta PDP Spokesman was also quick to remind his APC counterpart that, “Deltans will recall that even during his 2018 budget presentation to the State House of Assembly, Governor Okowa disclosed that great progress had been achieved in getting the militants to see the need for peace, a move that has brought calm and cessation of attacks on oil installations and facilities in the State, thus enhancing an increase in crude oil production and improving the revenue base of both the State and country considerably, as a result of earnings accruing from the increased crude oil supply”.

According to Osuoza, “Deltans who are known for truth will attest to the fact that Governor Okowa told the whole world that Delta State had crossed from the “egho aria,” mantra that had defined the early days of the Okowa administration, to the era of financial prudence, plugging all leakages and ushering in a new dawn of improved financial fortunes, all of which are clear indications that the State has moved away from the previous position of a financial downturn which is clearly visible to all, especially in the area of infrastructure where the State government has already delivered a total of 299 road projects, and still counting, with hitherto unconnected communities now connected”.

The Delta PDP mouthpiece, who roundly debunked the claims of the opposition APC that Delta State hospitals are running as consultancies, affirmed that the State hospitals are all well-equipped, with free ante-natal services granted to pregnant women in all the State-owned health facilities, as well as free Medicare which has been made compulsory for all children from age 0-5 and the States innovation in birthing and operating the Contributory Health Scheme, which is second to none in the country.

“The APC mission is a futile attempt at propaganda just to whip up sentiments and a very pathetic and childish strategy to call attention to the existence of that faction of the fractured party where the so-called publicity secretary, in the person of one Barr. Ogheneluemu Sylvester Imonina, is only just learning a trade he is ill-prepared and poorly equipped to manage. Deltans are not in any way convinced by these tantrums and shenanigans raked up by a political contraption of strange bedfellows, called APC; a set-up that cannot even resolve its factional differences,” Osuoza dismissed the APC.

“Delta is a PDP State and shall remain a PDP State. The APC faction merely showed that it is struggling to cleave to straws by making unfounded and unsubstantiated claims against the hardworking and award-winning Governor Ifeanyi Okowa. It is a clear index of the jitters preceding its final plunge into the inevitable oblivion of political irrelevance as a political party,” Dr. Osuoza stated. 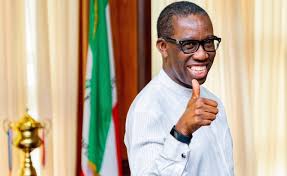