The former Managing Director/Chief Executive Officer of the management, information systems and technology consultancy company, Alpha Beta, Mr. Dapo Apara, has said that his belief in the federal government’s fight against corruption informed his petition to the Economic and Financial Crimes Commission, EFCC.
Apara has in a petition to the EFCC accused Alpha Beta, a company said to be owned by former Governor of Lagos State, Asiwaju Bola Tinubu, of involvement in a fraud of N100 billion.
He also accused the company of money laundering and tax evasion.
In the petition written on his behalf by his lawyer, Adetunji Adegboyega, the former boss of the company said Alpha Beta was used to perpetrate fraud.
The petition reads in part: “Over the years the company is being protected and shielded by some powerful politicians and people in the society which made them to always boast of being untouchable, but our client, feeling the need not to keep quiet again and strengthened by his belief in the fact that the government of President Muhammadu Buhari is keen on fighting corruption, which has been the bane of our country, is of the firm belief that it’s time to expose and open the can of worms called ALPHABETA CONSULTING.
“Our client is of the firm belief that it is time for the commission to step in and conduct a holistic investigation into the activities of ALPHABETA CONSULTING LIMITED AND ALPHABETA LLP, with a view to uncovering the massive corruption, money laundering, tax evasion etc going on in the company. Kindly note that one of the companies being used to perpetrate money laundering by the company is still another company named Ocean Trust Limited.
“The only hope of our client and indeed the teeming Nigerians who are victims of the crimes being perpetrated by these companies, in seeking justice is the commission, which we strongly believe in and therefore call on the commission to cause a holistic investigation into this case and all involved with the aim of bringing these criminals to justice, and not allow their claims of being untouchable to be validated.
“Kindly note sir that as our client is willing and able to provide information to substantiate the claims, though, we will plead for these to be done through us as he is presently fearing for his life having been receiving death threats from a lot of quarters because of this case.”
Alpha Beta is known to be a consultant to the Lagos State government since the days of Tinubu as governor.
Tinubu is believed to own the company.
• Source: The Next Edition 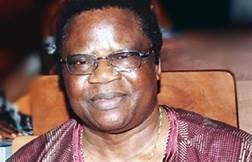 Elumelu distributes empowerment items worth over N300 million to 456 beneficiaries