By Samuel Ogundipe
Nigeria’s former finance minister, Kemi Adeosun, has left the country, a day after her resignation, sources close to her told PREMIUM TIMES on Saturday.
Mrs Adeosun, finance minister since November 2015, stepped down from office on Friday after owning up to parading a forged youth service scheme certificate.
President Muhammadu Buhari accepted her resignation on Friday night, 69 days after PREMIUM TIMES first published a detailed investigation of how she obtained the fake document and went on to secure plush employments with it, including as head of Nigeria’s finance ministry.
Mrs Adeosun explained in her resignation letter that the PREMIUM TIMES investigation was true, but said she did not know the certificate was forged as she relied on associates who helped obtain it after she returned from the UK.
The former minister expressed her gratitude for the honour to serve her country.
Although Nigerians welcomed her resignation, which many even complained was long overdue, they also demanded her immediate prosecution. Some civic groups have already instituted legal action to compel federal authorities to file charges against her.
But a day after she stepped down, Mrs Adeosun, who was born and raised in England, departed the country, according to her associates who notified PREMIUM TIMES of the development Saturday evening.
“She has left Nigeria,” a source said. “She most likely is in the UK by now.”
When PREMIUM TIMES called her Nigerian line several times Saturday night, it rang through each time in the Europe internal phone ringing effect.
Telecoms experts who also dialled her number at PREMIUM TIMES’ instance Saturday evening also said the telephone certainly did not ring in Nigeria.

The government investigation into the scandal was coordinated by the Secretary to the Government of the Federation, Boss Mustapha, PREMIUM TIMES found.
• Source: Premium Times 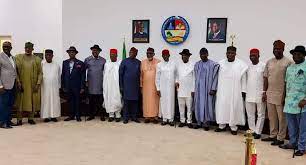 FEATURES – North’s ‘victory lap’ on PIB, Electoral Act: Why a divided South must brace up

Buhari urges Nigerians to live together in peace