Nigerians and Deltans, in particular, have been called upon to end the scourge of hunger, poverty and insecurity in Nigeria by using the opportunity of the general elections to vote President Muhammadu Buhari and the All Progressives Congress (APC) out of office.

They should vote in the Peoples Democratic Party (PDP) and its presidential candidate, Alhaji Atiku Abubakar, and in Delta State, vote in Governor Ifeanyi Okowa for the second term and all the candidates of the party.

Chairman of the Peoples Democratic Party (PDP) in the state, Olorogun Kingsley Esiso told the audience at the party’s campaign at the Iwere College, Koko that Pesident Buhari and the APC told Nigerians a lie when the promised in their campaign that the value of the Naira to a dollar will come down. “But today, the APC led Federal Government has instead brought poverty, hunger and death with Fulani herdsmen killing Nigerians. And so, he must be changed and replaced. And the person to replace him is the powerful Alhaji Atiku Abubakar, who will be the next president,” Esiso said.

Also speaking to the multitude of party supporters both at Koko and Sapele, Governor Okowa urged the people to recall that once upon a time when the PDP and Deltans met and decided to give one of them a big (Ogbonge) position, that it was agreed that Ogboru no good, and should be rejected.

And speaking in pidgin English, he said: “We reject am. I know say Warri North no de take back wetin dem don reject before.”

At the campaign in which political leaders from Koko and Sapele and the Senatorial candidate, Senator James manager mounted the rostrum and spoke, Governor Okowa said his re-election would be premised on the sustenance of peace, development and equity in line with the rotation of political offices in the state.

He took time to list some of the valuable projects already done by his administration and expressed confidence that his administration has delivered on the promises made during the 2015 campaign, stating that the next four years of his tenure as Governor will be better.

“I thank the people for the large turnout for the rally; the people of Warri North are always reliable, great followers, members of the PDP; I am here to tell you that I am going for the second term; we have done a lot of projects; during the administration of our Leader, Chief James Ibori, we worked for him for two terms, in the last administration. I was the Director-General of the Campaign, as a government, we have executed a lot of projects, we enjoy peace in our state and if we take the line of equity, we will complete two terms, ” Okowa said.

At Sapele, the governor called on political opponents to engage in campaigns and tell the people what they can do rather than holding nocturnal meetings, scheming on how to snatch ballot boxes and engage in electoral malpractice.
“We promised to dualise the road, it has been done and it will be commissioned soon. We promised to complete the market, it has been commissioned, the Sapele Technical College has been revamped and in the next four years, we will do more,” the governor said, asserting, “our opponents will not campaign, they will be at home planning bad things, but, they will not succeed, we will get unprecedented number of votes in Sapele and all over the state; the opposition should come out and campaign, they should not be planning on how to disrupt the elections.”
Those who spoke at campaign grounds include Deputy Governor Burutu Otuaro, Chairman of the State Campaign Council, Prof. Sam Oyovbaira, the director general of the Campaign Council, Rt. Hon. Funkekeme Solomon, Senator James Manager, Chief Akpeki, Hon. Irene imilar, Mrs Shola Williams, Dr Isaac Wilkie, Comrade Olumami Oyibo, Chief Solomon Areyenka, Chief Charles Obule, Hon. Joyce Overah, among others, assured Governor and the party leaders of the full support for the PDP, and expressed confidence that the party will get the votes from the people.
Senator Manager, who said he would talk because he has been involved at the beginning of the party, He said: “In 2008, there were three elections, and there was nothing like this is my brother, and that is my brother talk.
“Today, they are telling us to that we should reject the man that led the man that was rejected. And they are telling us to chose the man who the PDP picked but who rejected the leader that brought him.”
Manager continued: “Warri North be careful o. Anti-party activity does not pay This state once enjoyed a golden era, let’s come together to bring back that era. If somebody could not do it for eight years, is it by going to Abuja that he will do it?”
The senator used the occasion to debunk insinuations that he said something, saying: “I am not a flippant talker. I have not done anything to disparage anyone. I represent all of you.”
The PDP Chairman, Kingsley Esiso presented candidates for different electoral positions to the people. 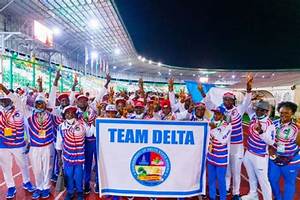 Ihedioha speaks to Imo people on Supreme Court’s ruling – Full text of the...