By John Amieyeofori
The lingering crisis within the All Progressives Congress (APC) in Rivers state has become a major blessing to the state ruling Peoples Democratic Party (PDP) which remained unchallenged in the forthcoming general elections.
It is all smiling for PDP as all candidates of APC have been barred from contesting elections in Rives state by the Independent National Electoral Commission (INEC) following orders of the courts.
INEC’s Resident Electoral Commissioner (REC) in the state, Mr Obo Effanga, said the decision by the commission followed the outcome of the ruling on the litigation between two factions in the state’s APC.
Effanga noted that the APC factions of Sen. Magnus Abe and that of the Minister of Transportation, Mr Rotimi Amaechi, had been in court over the conduct of congresses by the party.
The News Agency of Nigeria (NAN) reports that a Federal High Court in Port Harcourt, had on Monday ordered INEC to expunge the names of candidates representing the APC in Rivers in the February and March general elections.
The REC said that INEC had to obey the ruling of the court.
The presiding judge, Justice James Omotosho, ruled on the suit brought before him, asking the court not to recognise any candidate from the state APC.
Omotosho referred to an earlier ruling by the Rivers High Court, which nullified the ward, local government and state congresses held by the state APC.
“All nominations in the APC, from governorship, Senate, House of Representatives and others, are hereby nullified and void and set aside.
“Only political parties that conducted valid primaries are eligible to produce candidates for the general elections,” the judge ruled.
With the ruling, the main alternative opened to electorate in the state is PDP which APC has been threatening for some years.
(NAN) 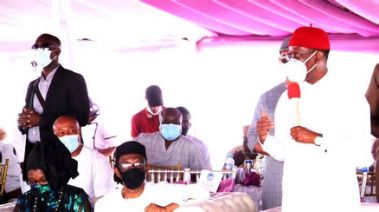