A puzzle that only the Independent National Electoral Commission (INEC) can unknot occurred today at the presentation of certificates of return to election winners into the Delta State House of Assembly in the March 9, 2019 elections in the state.
The puzzle is how INEC in Asaba would submit the name of the loser in that election leaving the man who won and was declared elected by the returning officer.
Hon. Chris Ochor Ochor of the Peoples Democratic Party (PDP) who won the election for the Ukwuani state constituency and was declared by the returning officer was shocked when it was not his name that was mentioned to receive the certificate of return. Rather, sources hinted that it was the name of his opponent of the All Progressive Congress (APC) that was on the certificate of return.
The situation that has taken many aback have sent tongues wagging with allegations being made that the name swap was the handiwork of dishonest and compromised INEC officials.
When banneronlinenews.com contacted the INEC Head of Public Affairs, Mr. Cyril to comment on the allegations that compromised INEC officials were responsible for the name swap, he said: “That is not true.” Asked to say what the truth is, he cut off the phone in a manner that suggested bad telephone manners by a public officer.
Meanwhile, the embattled Hon. Chris Ochor Ochor is set to go to Abuja to ask the INEC National Chairman, Prof. Mahmood Yakubu to correct the anomaly by putting his name on the certificate of return as the winner and duly returned winner. 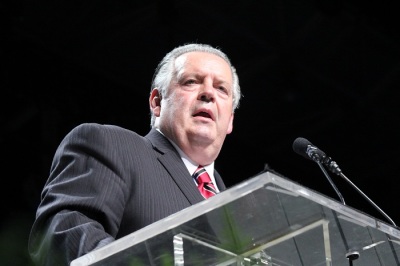