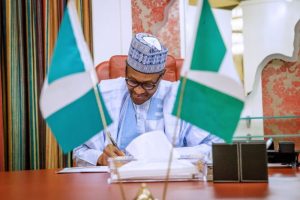 Buhari signed the new bill into law at the State House in Abuja, saying it was a testimony that his administration is committed to the welfare of Nigerians.

He said:” I would like to express gratitude to everyone who contributed to this very important task, and reiterate our commitment to the welfare of all Nigerians”.

He challenged Nigerian workers to justify the signing into law of the new minimum wage by showing more commitments to their work.

He also enjoined the Nigeria Labour Congress (NLC) to show more understanding of the current socio-economic situations in country.

He said: “I expect them (workers) to be more committed to their work at whichever level.

“I will like the Nigeria Labour Congress (NLC) to look at the economic situation of the country, the population, the poor infrastructure that we are trying to fix in terms of roads, rail and power.

“So, I wish Nigerian workers the best of luck.”

The Federal Executive Council meeting also deliberated and approved the minimum wage after which it was transmitted to the National Assembly and subsequently passed by both chambers of the legislative arm.

Senator Ita Enang, Senior Special Assistant to the President on National Assembly Matters(Senate) told State House correspondents that the Senate had on March 19, approved N30, 000 as the new national minimum wage with an appeal to the Federal Government to expedite action on assent and implementation.

“This makes it compulsory for all employers of labour in Nigeria to pay their workers the sum of N30,000 and this excludes persons who are employing less than 25 workers; persons who work in a ship which sail out of jurisdiction; persons who are in other kinds of regulated employments are excepted by the Act.

“It also gives the workers the right if you are compelled by any circumstance to accept salary that is less than 30,000 for you to sue your employers to recover the balance.

“It also ensures  and mandates the National Salaries, Incomes and Wages Commission and the minister of labour to be the chief and principal enforcers of the provisions of this law; and this law applies to all agencies and persons and bodies throughout the Federal Republic of Nigeria.

“The effective date is April 18, 2019 as Mr President has assented to; it has been assented to and it takes effect today except  such other provision as are contained in the Act.”

Enang said that the enforcement and the right to start the implementation of the provisions commenced immediately including such steps that  would to be taken gradually under the provisions of the Act.

He urged Nigerian workers to celebrate President Buhari and support his administration and  policies.

The senior special assistant said that the administration would come out and march together with Nigerian workers and Workers Day.