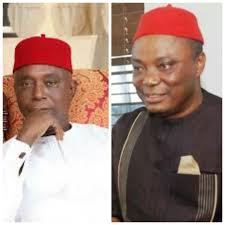 With the lingering controversy created by the recent ruling of Justice A.R Mohammed of the FCT Federal High Court, Abuja, over the case filed by Prince Ned Nwoko challenging the declaration of Senator Peter Nwaoboshi as the Peoples Democratic Party (PDP) candidate for Delta North Senatorial District, words have been continually traded by members of both camps over who becomes Senator come June 2019.

Among the reliefs granted by the Judge were an order for the PDP to publish the name of Hon. (Prince) Ned Nwoko as the Senatorial candidate of the Party, and an order restraining Senator Peter Nwaoboshi from parading himself as Senator-elect forthwith.

On the one hand, Prince Ned Nwoko has expressed his gratitude to God Almighty for the victory, even as he thanked Delta Northerners for standing by him in steadfastness. While Senator Nwaoboshi has opted to appeal this verdict, however, what is clear to observers is that the appeal seems to be predicated more on judicial technicalities.

Arguments from the presentations of the media team of the embattled senator, motions to strike out the appeal were on grounds of filing out of time, relying on a case that had since been struck out for lack of jurisdiction, and a mere order for PDP to publish Ned Nwoko’s name as its candidate (an issue that has since been overtaken by events.

Also being cited is the constitutional provision which, according to the SPON team invalidates the ruling of the court.

Section 285 (13)1999 as amended – “An electoral tribunal or court shall not declare any person a winner at an election which such a person has not fully participated in all stages of the election.”

Also flying around are allegations of bribery and corruption being raised by the SPON Media Team against Ned Nwoko.

Besides, they have not restrained themselves from delving into the private life issues of the Idumuje-Ugboko philanthropist, especially his relationship with a Nollywood star, all in a bid to discredit the Muslim faithful.

The face-off has risen so much dust and taken an intensity that the media aides are spinning the debate into a social media war.

The Ned Nwoko media Directorate in response has laughed off the bribery allegation and emphasized that for them, justice had been served. And on how he won the Delta North 9th Senatorial seat, his officials called attention to the nature of the man, pointing out issues. For them Ned Nwoko is aman who believes in equity.

“He who seeks equity must come with clean hands, this simple English adage, is the guiding principle of Hon. Prince Ned Nwoko’s political engagement.
In all his campaign visitations to PDP delegates and the people during the run up to the party’s Delta north senatorial district primary election, while canvassing for their votes, Prince Ned Nwoko never stopped to hype on a free, fair and credible primary election, which is conducted under a level playing field. He was emphasizing on these key areas because he is certain that he has what it is takes to convince Anioma people to send him to the Senate for more effective service delivery and for better image of the region at the national and international stage.”
They also claimed that with the assurances that their principal received from the high and low within his party, the PDP and the mass support he received from the delegates, he enthusiastically and optimistically went for the party primary which was held on 3rd October, 2019, at the Cenotaph, Asaba.

An aide claimed, saying: “I was there and these were my observations:

From the above 11 recorded observations, it was clear that the primary was manipulated to deny Prince Ned Nwoko victory in favour of SPON.

According to him, Prince Ned Nwoko, went to the primary with absolute confidence that the election will be conducted under a free and fair atmosphere and that there will be a level playing field for all the aspirants. But the contrary was observed. Being a man who eschews violence and rascality, he remained calm during the bizarre rigging exercise.
As a well exposed legal luminary of international repute, he knows his onions. He then proceeded to challenge the dubious results announced which gave SPON undeserved victory.

The first step he took was to petition the PDP SENATORIAL ELECTION PETITION APPEAL PANEL, to cancel the primary election and order a rerun based on the observed irregularities and manipulations.The Nwoko supporters  claimed that as usual, SPON in his characteristics of cutting corners, ‘quenched the case’, the appeal was not heard.

Faced with this brazen show of manipulative power displayed by SPON and his cohorts, Prince Ned Nwoko, was left with no other option than to go to Court, to reclaim his stolen mandate.”

Ned’s supporters have further cited the decision to Head to the Appeal Court as a vindication of the validity of the judgment, and have reechoed their commitment to watching justice unfold.

As the 8th National Assembly gradually shapes up, the uneasy calm in the PDP and Delta North Senatorial District over who occupies it seat is definitely an interesting one, even as present indices give the advantage to Rt Hon Ned Nwoko.  Ultimately, the Appellate court will give a clearer picture on who should actually wear the Delta North senatorial cap in the red chambers of the National Assembly.

We shall win this election, Atiku reassures PDP faithful

Outing of Nigerian Guild of Editors