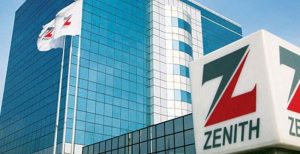 Zenith Bank Plc has recorded a profit after tax of N50.234 for the first quarter ended March 31, 2019, saying its market dominance remained linked to improved profitability.

The bank in a statement, said: “In the first quarter ended 31 March 2019, Zenith Bank Group recorded improved numbers across key metrics, driven by a solid performance in all business segments. This resulted in a Profit before Tax (PBT) of ₦57 billion, representing a 6% growth over the ₦54 billion achieved in the corresponding period in 2018. The Group’s on-going commitment to cost optimisation on the income statement and statement of financial position ensured earnings per share increased by 7% to ₦1.60 compared to Q1 2018.

“The growth in net interest income and operating income by 23% and 1% respectively mitigated the decline in gross earnings. The effective management of cost-to-income ratio, cost of funds and cost of risk offset top-line declines to deliver an enhanced operating income in the period.

“Our risk and asset quality continues to improve as cost of risk dropped significantly by 52% from 0.9% in the prior year to 0.4% for the period. This was achieved as impairment charges declined by 54%(₦2.5billion year on year reduction). Our cost of funds also improved, declining by 25% from 4%in Q1 2018 to 3% at quarter-end. This was supported by a 22% decrease in interest expense of ₦10billion over the same period, affirming the Group’s robust treasury and liquidity management. Our prudent cost management led to a 5% decline in our cost-to-income ratio by 5% from 53.3% in 2018 to 50.9% in the period with an absolute reduction in operating expenses by ₦2.3 billion year-on-year.

“The Group’s retail franchise continues to increase as retail deposits grew by N80bn between December 2018 and March 2019 representing a 9% growth notwithstanding the fact that total customer deposits dropped marginally by 3%. The drop in customer deposits was as a result of rebalancing of the deposit mix as expensive purchased deposits were forgone in favour of cheaper and stickier retail deposits.

“The volume and value of transactions across our electronic and digital platforms continue to grow as new customers are being acquired. Our balance sheet continues to strengthen as liquidity ratio is at 66.7%, loan to deposit ratio closed at 43%, and capital adequacy ratio ended the period at 25% respectively and remain above the relevant regulatory thresholds as at 31 March 2019.

“Going into the rest of the year and with improving economic fundamentals, we are confident of delivering value to all our stakeholders on our commitments even as we create more opportunities for businesses by supporting them through selective risk asset creation. We shall continue our investments in the retail segment of the market as we consolidate our leadership position in the corporate segment while maintaining a strong balance sheet.”

Why El-Rufai is angry at Saraki, by Senator Rafiu Ibrahim

The Lord has gone ahead of us, we cannot fail, says Okowa; Delta holds...