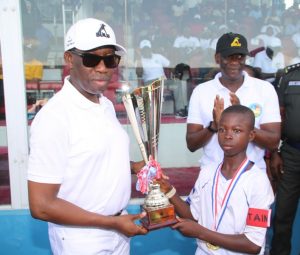 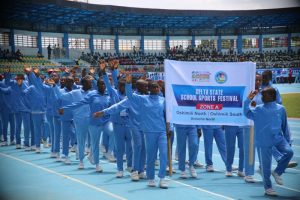 The well packaged grand finale of the first Delta State School Sports festival ended today on a note that revealed a spoil spot.

Observers saw clearly that the use of the whistle for the track events belittled the value of the prestigious Stephen Keshi Stadium that hosts international sporting events.

Why the organizers did not deem it fit to compute the use of the starter gun in their estimates for the track events remains a mystery. But the impact of that oversight was visible for all to see during the 400×100 metre relay race for the senior boys came under way.

Observer believed that had the gun been used the sound cancelling the race would have been heard by that athlete and he would not have continued. It was the spoil spot of the event.

Meanwhile, Governor Ifeanyi Okowa who was greatly excited about the Schools sports festival said it was organized to rekindle the sporting spirit of yesteryears, noting that suddenly sports festivals came to take the back seat. But rekindling the hope of sports enthusiasts, he averred that since the sports fiesta will remain an avenue to discover budding talents for national and international sports meet, he said that the Delta state Schools Sports Festival will remain an annual event in the state.

The Governor who gave glory to God that an annual School Sports Festival was born in the state, stated that talented sports men and women discovered at the festival would be nurtured by the state government. He than hoped that those who will take over from him in 2023 will continue with it and build on what has been established so far.

“It is well known that Delta State is a sports-loving state and its athletes did very well in feeding the teams of Mid-West and later Bendel States before Edo and Delta States were created from Bendel State; what we are doing this afternoon is to replicate what we were doing in the past, in the days of old Bendel and we are excited to witness and participate in this sports festival,” the governor said.

He added, “we are aware that three editions of the Principal’s Cup have been held; today, we are witnessing the finals of the Headmaster’s Cup because, our desire is to catch them young, nurture them to be professionals at the national and international stages.”

“I am grateful to the Commissioner for Basic and Secondary Education and members of the organizing committee for this wonderful school sports festival; it is the maiden edition and I am confident that in the next four years that I will be the Governor of Delta State that it will be an annual event and I hope my successor will continue to encourage the festival which is a fertile ground to catch budding talents,” Governor Okowa stated amidst thunderous applause at the Stephen Keshi Stadium that was filled to capacity.

The governor commended the head teachers and principals of the participating schools, observing that the athletes put up a great show of good sports men and women at the event.

He also, used the occasion to call on other state governors to encourage school sports festivals as it will make the youths to be physically and mentally fit.

Earlier in an address, the Commissioner for Basic and Secondary Education, Mr Chiedu Ebie had thanked Governor Okowa for encouraging sporting events at the secondary and primary schools in the state, observing that such had given a great boost to the spirit of competitiveness among youths and also, kept the students and pupils busy always as they engage in both physical and mental training.