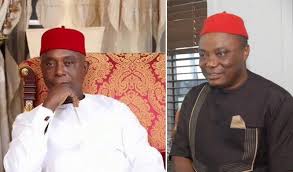 The Independent National Electoral Commission (INEC) has been faulted for presenting Prince Ned Nwoko with a certificate of Return as the senator-elect for the Delta North Senatorial District of Delta State.

Decrying INEC’s presentation of the Certificate of Return by reason of the Federal High Court judgment that declared Nwoko as the real winner of the Delta North Senatorial primary of the Peoples Democratic Party (PDP), Mr. Andie Onyemeziem, the Special Assistant to Senator Peter Nwaoboshi told journalists on Wednesday, 15/5/2019 at the Anwai Road, Senatorial office Nwaoboshi that the action was an error, and urged INEC to truly live above board like Ceasar’s wife by being an impartial umpire.

Onyemeziem argued that it was wrong for INEC to issue Prince Ned Nwoko a certificate of return because the court never directed as such. He said, “INEC erred in issuing Certificate Of Return to Ned Nwoko who was not the PDP candidate for the March 9 election. PDP did not submit his name to INEC and INEC never published his name as the candidate for the party in Delta North.

“Ned Nwoko did not meet the requirements to be nominated by PDP to fly its flag in the National Assembly elections. At the PDP primary election held in Delta State on October 2, 2018, Senator Nwaoboshi secured the highest vote of 506, while Nwoko came second with 453 votes and Paul Osaji scored 216 votes.”

Alleging foul play in the decision of INEC to present the Certificate of Return to Ned Nwoko, based on a Federal High Court ruling, which has already been challenged at the Court of Appeal, Onyemeziem queried the seeming reawakening of the suit filed by Ned Nwoko, which had been deemed statute barred, recalling that Nwoko had earlier filed the same suit  and summarily withdrawn it, which promoted the Court to strike it out since it had been filed 19 days after the primary and in the wrong court.

Onyemeziem had averred thus: “I don’t want to dwell much on the matter not to sound subjudice, since we have appealed, but from what has already transpired at the Federal and from solid information available to us, we can convincingly posit that the suit at the Federal High Court was filed about 65 days working days, after Senator Nwaoboshi’s name was submitted to INEC.

“The suit has since been caught up by section 285(9) of the 4th Alteration to the 1999 Constitution that prescribed 14 days for filing of pre-election matters, having failed to secure any hearing by the court”.

Onyemeziem also pointed out that the only body constitutionally mandated to supervise primary elections and submit names of successful candidates to INEC after the Primaries is the PDP National Working Committee and they are the authorized body that possess the Certified True Copies, CTC of the results of the primaries in their custody, even as he wondered about the authenticity of the results submitted to the court by Nwoko, by allegedly deploying the method of originating summons to file the suit  and technically shut out PDP and other witnesses from testifying.

“My boss is presently contesting the verdict by Justice Ahmed Mohammed of the Federal High Court in Abuja, who had entered judgment against him in error judgment on April 3, 2019. I do not want to dwell much on the action of the judge in deciding to give the ruling which we are now challenging, but from all available documentations and analysis, the suit had been decided on the basis of highly contradictory and conflicting evidence, particularly in relation to the  ballot papers upon which the ruling was based and ballot counting which was could have been compromised in the absence of witness representing all the parties to the suit.

“It was on this judgment that Nwoko obtained Certificate Of Return from INEC, in spite of the fact that we have already appealed it and the Court of Appeal had already set a date for hearing to commence ,” Onyemeziem lamented.

He then questioned the intentions of INEC on the Delta North Senatorial seat election, saying that its latest action of presentation of Certificate to one of the parties in the suit, whilst the legal contest is ongoing, does not only reflect the election umpire in a disturbing light, but is sadly brewing grave hatred and eventual political crises for the peaceful senatorial district.

Hon. Andie Onyemeziem confirmed that hearing in the Appeal filed by Senator Nwaoboshi has been fixed for May 22, 2019 and thereafter judgment, even as he emphatically stressed that nothing has been lost and re-echoed his belief that the issue on ground has not spoilt the chances of Senator Nwaoboshi, as he has faith that the error will be reversed by the Appellate court.

“The major thing actually is that Ned Nwoko filed his case out of time because the suit was already statute barred by the time he approached the courts,” Onyemeziem said.

Meanwhile, it would be recalled that the Abuja Division of the Court of Appeal, on Tuesday, May 13, okayed accelerated hearing on the disputed Delta North Senatorial seat that was won by the Peoples Democratic Party, PDP candidate, Peter Nwaoboshi. A three-man panel of Justices of the appellate court headed by Justice Adamu Jauro, fixed May 22 for definite hearing of the appeal that was  lodged before it by Senator Peter Nwaoboshi, whose election was nullified by the Federal High Court in Abuja, on the grounds that he was not validly nominated by the PDP.

The appellate court panel further gave the Respondent, Prince Ned Nwoko, who was handed the senatorial seat by the high court, six days to respond to two separate appeals that were lodged against him by both Nwaoboshi and the PDP.

Justice Jauro equally directed the Independent National Electoral Commission, INEC, to within the same number of days, state its own position on the disputed primary election.

The orders followed an application by Nwaoboshi’s lawyer, Mr. Anthony Idigbe, SAN, who applied for the abridgment of time for hearing of the appeal.

Idigbe, SAN, noted that the high court judgment being challenged was delivered on April 3, stressing that the appeal will become statute barred on June 3, when the constitutionally allowed period will expire.

The application was not opposed by Nwoko’s lawyer, Mr. Ahmed Raji, SAN, who however requested to be given seven days to file his client’s response to the appeal. Likewise, both INEC and the PDP, which were represented by Mr. Anthony Onyere and Mr. Emmanuel Inodem, respectively, said they were not opposed to the application for abridgement of time.

Consequently, in its ruling, the panel, gave the Respondents six days to turn in their processes for commencement of hearing on the matter.

It will be recalled that Justice Ahmed Mohammed of the Federal High Court in Abuja had in a judgement on April 3, held that Nwaoboshi was not validly nominated in the primary election the PDP held in Delta State on October 2, 2018.

However, dissatisfied with the judgment, the embattled lawmaker approached appellate court, asking it to set it aside. In his grounds of appeal, Nwaoboshi contended that the verdict was entered against him in error. According to him, the trial judge overreached himself by deciding the suit on the basis of highly contradicted and conflicting evidence, particularly as the ballot papers upon which the trial judge based his judgment were seriously controverted and ballot counting was impossible without calling a witness.

He urged the appellate court to hold that the trial judge erred in law when he held that the suit was not caught by the 14 days rule in section 285(9) of the Fourth Alternation to the Constitution of the Federal Republic of Nigeria 1999 (as amended), as the primary election, subject matter of the suit, was conducted on October 2, 2018 and the 14 days time allowed started running on the same October 2, 2018 when the primary election took place.

The appellant further wants the verdict nullified on the premise that the trial judge erred in law when he assumed jurisdiction to entertain the suit despite that it had become statute barred. Insisting that he won the PDP primary poll, Nwaoboshi, said whereas he got a total of 506 votes, the Plaintiff got 453 while another aspirant, Paul Osagie secured 216 votes. The high court had on April 17, rejected application by the appellant for the stay of execution of the judgment pending the determination of his appeal. He had through his lawyer, Mr.

Selekowei Larry, SAN, pleaded the court to suspend the judgement to allow the appellate court to decide the case.

The plea was refused by Justice Ahmed Mohammed who held that the high court had become functus-officio in the matter. The trial Judge ordered all the parties to go before the appellate and ventilate their case, stressing that record of proceedings in the matter had already been compiled and transmitted to the higher court.

The plaintiff had in a pre-election suit he filed before the court, alleged that PDP leadership, illegally submitted Nwaoboshi’s name to INEC after he lost the primary contest. In the Originating Summons he filed on December 11, 2018, Prince Nwoko, urged the court to among other things, determine whether INEC which supervised the primary election of the PDP and knew that he won majority votes cast, was not wrong to accept and publish Nwaoboshi’s name as PDP’s candidate for the Senatorial poll.

He also urged the court to determine whether by mandatory provision of the Electoral Act, INEC, was not bound to publish his name as the bonafide winner of the Delta North Senatorial primary, having secured the highest number of votes.

More so, the plaintiff, prayed the court to determine whether the continued display of Nwaoboshi’s name instead of his own, does not constitute a violation of the Constitution, Electoral Act and INEC’s Guidelines for the conduct of primary election. He asked the court to declare that the publication of Nwaoboshi’s name, after he lost the primary election, was illegal and unconstitutional.

The plaintiff, aside alleging that Nwaoboshi used illegal delegates during the primary, told the court that the Senator-elect hired thugs to cause stampede when he learned of his imminent defeat. He described result sheet that was eventually returned by organisers of the primary election, wherein he got 453 votes as against Nwaoboshi’s 506 votes, as “a fraud and sham”. The plaintiff subsequently secured an order of the court for all the ballot papers that were used for the primary election to be brought and counted before the court in the presence of representatives of all the parties. In his judgment, Justice Mohammed noted that though the order for production of the ballot papers was directed to the PDP, however, it was Nwaoboshi that vehemently opposed the order.

The court held that PDP ought to have exhibited the ballot papers it said were used in the conduct or the election, since it failed to comply with the order that directed it to produce the ballot papers to be recounted. Relying on section 167 of the Evidence Act, Justice Mohammed held that action of the PDP indicated that the Plaintiff would have won if the ballot papers were brought before the court. He dismissed all the preliminary objections the PDP, Nwaoboshi and INEC lodged against the suit.

The court held that the suit was not status barred, saying it has the requisite jurisdiction to entertain same. The Defendants had in their objections, argued that the suit, was caught by section 285(9) of the 4th Alteration to the 1999 Constitution that prescribed 14 days for filing of pre-election matters.

They argued that the suit was filed over 65 days after Nwaoboshi’s name was submitted to INEC.

Nevertheless, the court noted that the Plaintiff had earlier instituted an action before an Abuja High Court to challenge the outcome of the primary election. It held that though the Plaintiff subsequently withdrew that suit, he instituted the instant action after his petition against the outcome of the primary poll was ignored by PDP’s appeal panel.