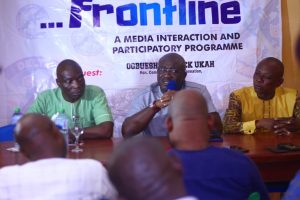 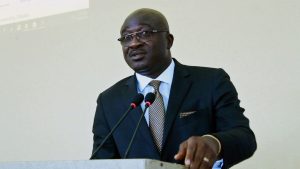 It’s a known fact that in politics, especially when it comes to our nation, Nigeria, within small organisations, there is always acrimony and distrust among the people and a member, which often leads to what, has derailed our political, economic and social growth over the years. Thus, while other nations are growing, developing their systems to seamlessly move in the right direction, we found our own nation, state and organisations in a state of pulling down a structure, even at the beginning, or the end just to discredit the initiator or the team that is in charge.

This ugly attitude has greatly affected our thinking and behaviour, that even within the media family we have become more destructive and blind to our callings, that many of us have chosen the part of finding faults, or creating alibis when none exists. And this is what just happened at the end of a success media interaction with the Honourable Commissioner for Information of Delta State, Chief Patrick Ukah, where reference was made in an article, Titled “Second Tenure State Executive Council: Why Governor Ifeanyi Okowa Must Not Reappoint Delta State Information Commissioner, Patrick Ukah Again..”

The above article would not have been anything to the members of the Delta Online Publishers Forum, the organisers of the FRONTLINE PROGRAMME, if not for Paragraph 2 of the very article which is totally misleading, absolutely fabricated and overzealously contrived in bad faith and obviously intended to undermine the professional credibility and reputation of the seasoned and veteran journalists and publishers who were present at the interactive session with the Honourable Commissioner.

For starters, I as the Chairman of DOPF, did not ‘passionately appeal to anybody not to be hard on the Commissioner with critical questions’. Those who were present at the parley will confirm that what I said was purely within the context of the rules of engagement and best professional practices all over the world, in any event that involves an interactive session. In summary, I advised participants to display a high sense of decency, decorum and factual articulation rather than speculative jibes and salacious misinformation, sourced from unconfirmed and unsubstantiated rumours, in their verbal engagements with the Commissioner. This can be verified from our video recordings.

It is indeed to the high credit of those who spoke, that virtually all the questions asked, were of high calibre, intellectually sound and delivered in clean and proper English, which were not only excellent as a modus for rating journalists in the state, but indeed required lengthy, detailed and concise answers from the Commissioner, to the contextual satisfaction of all present, except maybe those who were only in attendance to find something fishy to report, like the baseless allegation of ‘passionate appeal’ which is totally unfounded.

It is quite sad that people who did not attend an event will report copiously on that programme from the heresay of someone who probably shares the same skewed mindset with them about someone. This of course is very unprofessional and ethically unacceptable in Journalism and we must continue to challenge such pedestrian practices that tend to rubbish our profession.

Secondly, it is absolutely annoying and insulting to a ‘proper’ journalist to even suggest that he was compelled to indulge, censor and limit himself and his professional curiosity because of a ‘passionate appeal’ for him not to ask critical questions. That such a situation was even mentioned in the first place is not only an insult to the professional reputation of those journalists present at the session with the Commissioner, but a degrading insult on the sensibilities of every journalist in Delta state. Every journalist worth his salt, will ask whatever question he desires to ask, irrespective of whatever rules of engagement are suggested by the moderators. The problem we have noticed at interactive sessions like this, is the challenge of spoken English and incoherent tenses, which often rears their ugly heads and breaks forth embarrassingly, either in written stories or in the course of asking questions by some of our ‘colleagues’; a sad reflection of a particular professional decay in the evolution of our practice over the years.

Thirdly, the Commissioner did not quote any figures during the interactive session with publishers, but it is also important to state here too that he was also very clear and precise in listing the achievements of the Ministry during his tenure, all of which are verifiable.

Any journalist worth his salt and is keen on establishing the veracity of his claims, will do proper investigative journalism to ascertain if indeed the achievements the Commissioner has listed as accomplished under his watch are truly on ground and verifiable. Then one can further investigate whether the figures quoted are true and overall reflection of the amount expended on listed activities, successfully delivered.

Finally, the intention and mandate of the Online Publishers FRONTLINE programme, is to provide a platform and opportunity for the critical segments of the society to share views, create awareness for their programmes, initiatives and activities, and by so doing meet the yearnings of members of the public who seek neutral platforms to make their views known and contribute to the state and national discourse.

To therefore suggest as the writer of this referenced article did in the same paragraph 2, that the Commissioner ‘declined’ to answer questions on how much was expended on the projects, is dubiously uncharitable and economical with the truth, as those who were physically present at the interactive session will confirm that such a question was not even posed to him to elicit his disinclination to respond or not. This can further be verified from video recording of the event.

The FRONTLINE Programme provided the Honourable Commissioner with the veritable platform to once again enumerate his achievements, challenges, visions and how far and well his expectations were realized. The FRONTLINE event is neither an inquest nor an Inquisition or even a truth and reconciliation tribunal.

Hon. Patrick Ukah, the Delta state Commissioner for Information, was very eloquent, lucid, concise, unruffled and uncluttered in presenting the scorecard of his stewardship and critical contributions as a solid pillar in the actualization of the SMART Agenda of the administration of Senator Dr. Ifeanyi Okowa, the governor of Delta state. His answers to the questions posed to him were clear, precise, unambiguous and, and at a point he had to refer to one or two members of the Ministry of Information and DBS staff, who were present, to corroborate some of his claims.

The Delta Online Publishers Forum, DOPF, does not deal in speculations, rumours, propaganda or here say. We have provided the platform with our FRONTLINE programme for the Commissioner to state his claims, list his achievements and provide critical insight and explanation to some of the things that happened and the processes engaged to achieve and resolve several inherited conflicting and controversial situations, which many did not even know about until he said it during the interactive session.

We have heard him and the onus is now on us, as professional Journalists to set the investigative machinery in process to unravel, substantiate or debunk some or all of his claims, with verifiable, empirical, incontrovertible evidence and figures.

We also suggest the same approach to every Journalist who is keen on this matter, rather than relying on rumours, here say and unsubstantiated statements and figures, as reason to describe or qualify his claims as lies.

There surely ought to be some high level of ethical, professional standards to be maintained and upheld in this practice, before we willfully and maliciously destroy this beautiful Journalism profession for us, by ourselves.

It is our hope and expectation that this rejoinder will be read dispassionately and with professional understanding and comprehension. It is so very easy for some people in this profession to give labels and branding, once the writing does not conform to their world view or mindset.