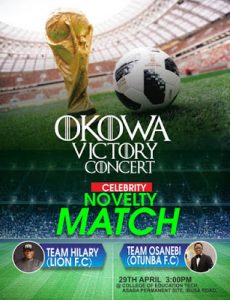 Eulogies for the accomplishments of Governor Ifeanyi Okowa of Delta state in his first tenure took the centre stage in Asaba at a novelty match held at the permanent site of the Federal College of Education (Technical).

Speaking to Banneronlinenews.com during the event in which Lions FC squared up against Otunba FC, Osanebi who was represented by Mr Mathias Osanebi, said the essence was to emphasize that Governor Okowa was very much worth celebrating.

He stated: “The reality is that His Excellency Sen Ifeanyi Okowa’s victory is worth celebrating because for the past four years he has done a very good job of uniting Deltans. In so many areas, he has touched Delta state positively and most importantly, his administration has united the youths more than has ever happened in the state.”

Pointing out that the Smart Agenda of the Okowa Administration has proven very cerebral in economic management and micro management of the state’s resources, Ibegbulem declared that “he came in when the economy of the state was in tatters; however, he was able to steer the ship of governance effectively. Therefore his victory is a win for Deltans”.

The novelty match which was a sequel to the OKOWA VICTORY CONCERT billed to hold on Wednesday, May 1st 2019 at the Dome Event Centre, Okpanam Road, Asaba saw top entertainers and show promoters in Delta State unite in a celebratory atmosphere to reecho their approval of the Ifeanyi Okowa Administration.

At the end of 90 minutes a header from Balo and brace from Emmanuel of Otunba FC saw them defeat Lions FC 3-0.

Highlight of the event was the cash presentation of N500,000 to the organizers of the Okowa Victory Concert on behalf of Hon Hilary Obi Ibegbulem.

PERSPECTIVE -The Idumuje Ugboko Kingship And Murders – Which Way Forward?

Our fire stations are functional, says Ogwezzy, no Deltan absconded in Israel