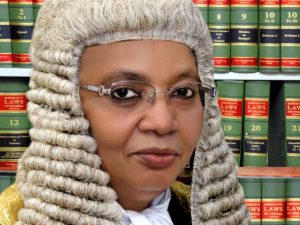 Justice Zainab Bulkachuwa, the Chairman of the  Presidential Election Petitions Tribunal, has recused herself  from participating in adjudicating petitions challenging the re-election of  President Muhammadu Buhari.

Zainab, President of the Appeal Court, announced her withdrawal from the panel on Wednesday in Abuja, after the tribunal had delivered ruling against an application challenging her membership of the tribunal.

“I have allowed the ruling on the application urging me to recuse my membership of the tribunal to test the position of the law.

“Now that the application has been dismissed on account of incompetence, I hereby announce my withdrawal from the panel.

“The remaining four members of the panel will continue while steps will be taken to appoint my replacement,’’ she said.

The News Agency of Nigeria (NAN), recalls that the Peoples Democratic Party (PDP), and its Presidential Candidate in the Feb. 23 general election, Alhaji Atiku Abubakar, had approached the tribunal to challenge Bulkachuwa’s membership.

They prayed the tribunal to order the discharge of its chairman on account of preconceived bias.

The petitioners averred that Justice Bulkachuwa was wife to Alhaji Adamu Bulkachuwa, a Senator-elect on the platform of the All Progressive Congress (APC), the third respondent in the petition.

They also deposed that Justice Bulkachuwa was a mother to Aliyu Haidar-Abubakar who was an aspirant in the last APC governorship primary in Gombe State.

Giving ruling, Justice Peter Igeh held that the reasons adduced by the applicants were not sufficient to discharge the chairman from presiding over the tribunal.

“In the circumstance, the application is dismissed and the position of Justice Zainab Bulkachuwa as the the chairman of the tribunal is hereby re-affirmed,” he ruled.

While adopting his address, Dr Levy Uzoukwu (SAN), Counsel for Atiku and the PDP, had said that the chairman of the tribunal had unequivocal relationship with Alhaji Adamu Bulkachuwa, a Senator-elect on the platform of the APC, by marriage.

Uzoukwu submitted that Justice Bulkachuwa’s husband would become an automatic member of the third respondent’s National Convention when sworn-in as a full senator on June 1.

According to counsel to the applicants, the likelihood of bias in favour of the APC in determining the petition against Buhari’s re-election as president is certain.

He said that it was also an established fact that Justice Bulkachuwa’s son, Aliyu Haidar-Abubakar, was an aspirant in the last APC governorship primary in Gombe State.

He alleged that Bulkachuwa had earlier made a prejudicial comment during the inauguration of the tribunal which raised suspicion of likelihood of bias.

Uzoukwu argued further that Justice Bulkachuwa’s membership of the panel was inimical to justice, adding that the petitioners were concerned about how justice could be served in the circumstance.

He therefore, urged the tribunal to uphold his client’s motion by praying the chairman to recuse her position as the presiding justice of the panel.

Mr Yunus Usman (SAN), Counsel for the Independent National Election Commission (INEC), raised an objection on the application, and argued that the applicant’s prayers were not known to the 1999 Constitution of the Federal Republic of Nigeria (as amended).

Usman submitted that Section 42 of the 1999 Constitution emphatically forbade discrimination of citizens on the basis of sex, religion, tribe and political leaning.

He said that the application was incompetent and without merit, adding that the country’s constitution did not support the affidavit filed by the applicants.

“I humbly refer My Lords to Section 42 of the 1999 Constitution. I therefore submit that exhibit two and four annexed to the applicant’s motion are of no relevance,” he said.

On his part, Chief Wole Olanipekun (SAN), Counsel for Buhari, submitted that the applicants did not have the powers to participate in the selection of justices to adjudicate on the matter.

“No one has the right and will power to ask the justice to step down other than the discretion of the judge.

“What of if the Justice uses her discretion to say no since there is no any provisions in the 1999 Constitution that mandates the Judge to do so.

“We are of the position that the issue be resolved using law and the discretion of the court,’’ Olanipekun said.

Mr Lateef Fagbemi (SAN), Counsel for APC, objected to all the issues canvassed by counsel for the applicants, adding that the issues had no backing of the country’s constitution.

Fagbemi, who also aligned himself with Olanipekun’s submission, however, urged Justice Bulkachuwa to withdraw from the panel in order to keep her good name.

Uzoukwu, arguing on point of law, said that the status of the chairman of the tribunal as wife and mother of two card carrying members of the APC had brought to question her transparency in adjudicating on the matter. (NAN)