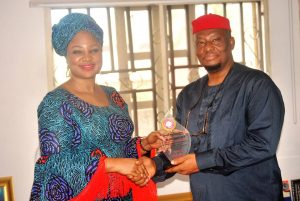 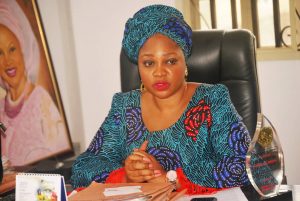 The Executive Secretary, Delta state Micro, Small and Medium Enterprises Development Agency (DMSMA), Chief (Mrs) Shimite Bello says that as a proud daughter of Anioma, she is blessed to have the opportunity to be a part of the administration of Governor Ifeanyi Okowa.

Speaking today, Tuesday, May 14, 2019 shortly after she was conferred with the Distinguished Award of Excellence for Outstanding Performance in Public Service (Micro credit/Small Medium Scale Enterprises Development), given to her by the Anioma Media Associates (AMASS).

While acknowledging that it is a commendable thing to be appreciated by her people, she said however  that what is important is what one does behind the scenes away from the glare of the public that matters.

“I love people; I’m not happy to see people in poverty. I may not have money, but I may be able to give advice of encouragement. Being where I am today is not that one is spectacular, or better than anyone else, it is just the opportunity that God provided for one,” she said.

The Akpeli Ugo fufu 1 of Ebu Kingdom, a chieftaincy title conferred on her recently by His Royal Majesty, Onu Paul Odilil of Ebu Kingdom, Oshimili North Local Government of Delta State, she said: “I am particularly a proud daughter Anioma. I will identify with everything that is Anioma.”

She continued: “I am blessed to have the opportunity to work in the administration of Governor Ifeanyi Okowa, a thorough bred technocrat and a man of integrity.”

The graduate of political science from Nigeria’s premier ivory tower, the University of Ibadan announced that her vision is to contribute her quota to the development of the human person, pointing out that it would gratify her to be counted among people that have impacted on people’s lives.

Chief Bello disclaimed being a part of those in the female gender that indulges in pulling down other women, pointing that is excited to see other women excel in their talent areas, even as she believes that there is space for everyone to grow and make a mark at the appropriate time.

The conferring the award on her, the National Co-ordinator of Anioma Media Associates, Prince David Diai to the Executive secretary that the group is a body of made up of indigenous media publishers and practitioners, and other top media professionals in the print, electronic, online and related engagements of Anioma extraction that operate in Delta and the Diaspora. “Our aim is to connect with our brothers and sisters in every sphere of the socio-political endeavour and ultimately promote, project and celebrate the Anioma essence, interests and agenda, through a dedicated and vigorous media initiative, driven by the diverse media publications and portals of Anioma Media Associates and other media platforms,” Diai said.

He continued: “Ma’am, we are indeed greatly impressed with the tremendous work you have done in managing and effectively monitoring the Micro-Credit Scheme, especially in sanitizing and streamlining the Small and Mediaum Scale sector for greater efficiency and optimal utilization of resources in line with the brilliant SMART Agenda of His Excellency, Senator Ifeanyi Okowa, Executive Governor of Delta state, for the benefit of Deltans and delivery of more prosperity to the people operating at the grassroots.

“It is in recognition of your sterling attributes, as well as your brilliant administrative skills, your human disposition and indeed your uncensored humility and simplicity, coupled with the strategic latitude you have exhibited in rejiging and expanding the MSME sector,  delivered through robust, result oriented initiatives, dynamic, hands-on astuteness and strategic operational acumen, all of which have translated beautifully into an award winning programme acclaimed nationally and globally, that we most respectfully confer on you, the Distinguished award of excellence for outstanding performance in public office (Micro credit/Small and Medium Scale Sector), 2015-2019.

“Your exceptional track record even before assuming responsibility as the head of DSMSDA speaks volumes and you have emerged in the last four years, not just as one of the great pillars and success stories of the SMART Agenda, but indeed as a great Anioma Ambassador in Delta State, nationally and internationally.

“Of course, we know that as a public officer, your constituency is the entire Delta State but we have recognized the good works you have been doing for Deltans since your appointment and this award, just like your prestigious chieftaincy title in Ebu Kingdom, is to express our satisfaction with you that as an Anioma Ambassador in the Delta State Government, you have not let us down. We are proud ouf you, Ada Anioma.

“Let us also express our undiluted appreciation to His Excellency, Senator (Dr.) Ifeanyi Okowa, the Executive Governor of Delta state for giving you the opportunity to serve Delta State as one of our Anioma representatives in the Delta State Executive Council.

“We have no doubt whatsoever that the brilliant work you have done over the years, coupled with your charming and charismatic personality, your gorgeous, breathtaking panache, the excellent blend of ethno/cosmopolitan disposition you exude and your acceptance as a cerebral beacon of hope and trust in national and global conclaves and communities, have all recommended you with distinction and positioned you favourable for continued service to our dear state,” David Diai declared. 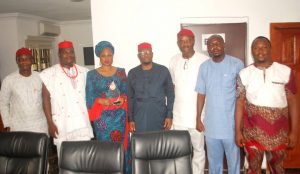 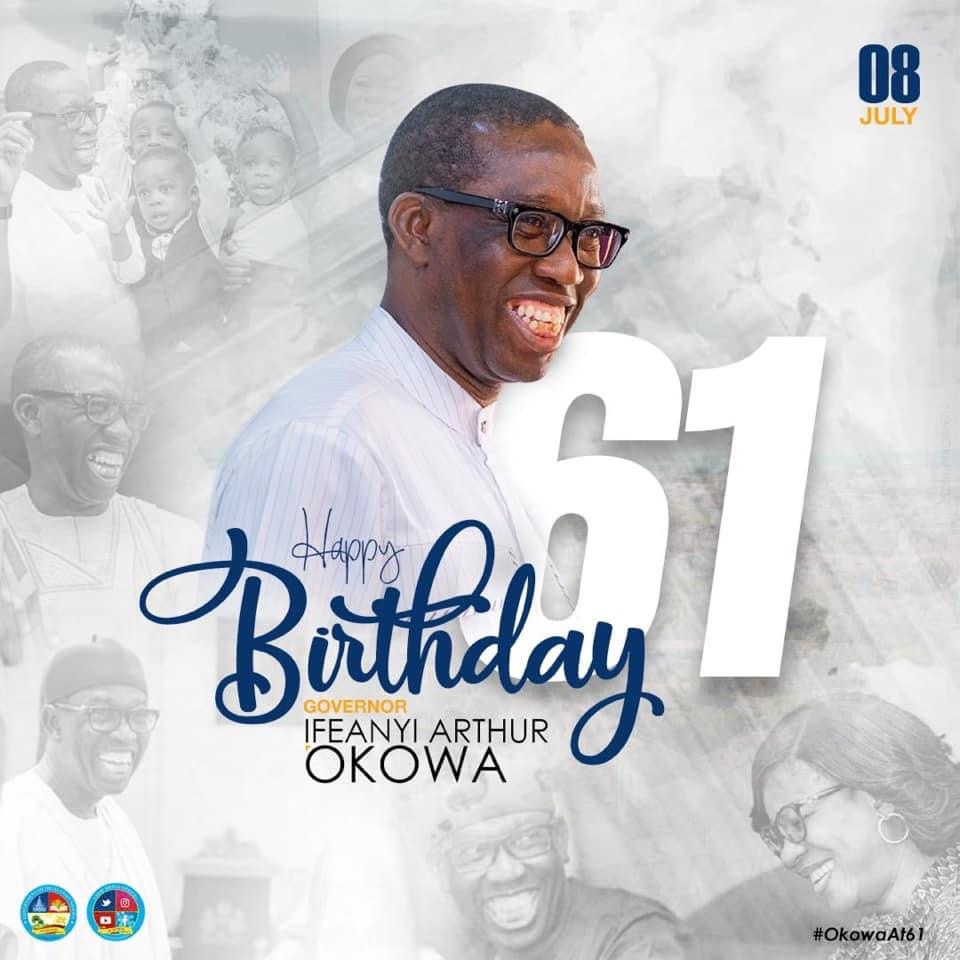