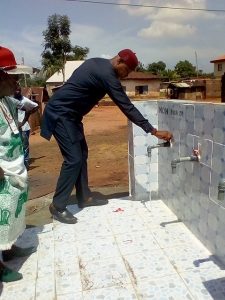 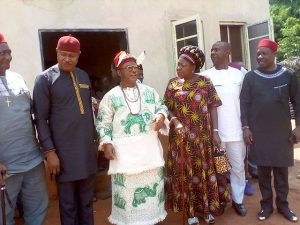 The people of Onya community in Illah, Oshimili North Local Government of Delta State heaved a sigh of relief today with the commissioning of a self-help water project for the community, thus signaling an end to the suffering that the people for lack of portable drinking water.

The senior Special Assistant to the Governor, Chief Jaunty Okwudi, who represented the Special Adviser to the Governor on Peace Building, Chief Edwin Uzor, congratulated the community for achieving this feat, noting that this was possible because there is peace in the community.

“This kind of thing can only happen in an atmosphere of peace. This will further attract more projects as it shows that the entire Illah is ready for peace.

“We encourage you to continue with the peace process so that the government of Governor Ifeanyi Okowa will be motivated to help bring more development projects to Illah.”

Chief Okwudi thanked Hon. Pat Ajudua, the chief whip of the Delta State House of Assembly for being present at the commissioning as well as Chief Oney Ofuokwu, the Uwotor of Illah, to support the people of Onya and Illah, even as he stressed that the people should continue to live in peace.

The traditional ruler, HRH Obi Victor S. Akazue, the Obi Agwu Onyah, while appreciating the guests for gracing the occasion said the water project, though little, promises to bring solace to the people, especially the ageing women and mothers.

The Obi Agwu Onya recalled that in the past were subjected to the rigors of navigating through terribly rough terrains to the streams. “We have fullness of joy today for seeing light at the end of a dark tunnel. We therefore invite you to join us in giving God all the glory,” Obi Akazue said, adding: “We are proud to congratulate every Onyah indigene, especially our youths based in Lagos who initiated this laudable project, resorting to self help to contribute the initial funds for the project.”

Turning to Hon. Pat Ajudua, the Obi lamented that the Onyah village has always been marginalized in the areas of distribution of social amenities in Illah.

He said: “Once upon a public water project, every other village in Illah except Onyah. Promptly, the people of Onyah promptly had their pipes and taps installed.

“The first and most popular water side market known to Illah people and other communities in Oshimili North Local Government Area should have been ‘Out Onyah’. However, this market has almost been forced to close down as a result of the poor state of the road.”

Obi Akazue continued: “It is common knowledge that roads to other water side markets in neighbouring villages are graded occasionally while ours continue to suffer neglect.

“About two years ago, our community was heavily threatened by floods emanating from neighbouring village due to the topography of our town. Our building along the flood channels were almost brought down by the floods, prompting us to urgently embark on drainage construction that cost over N1qmillion. Our efforts were palliative measures that brought relief to our people.”

Highlight of the ceremony was the commissioning of the project by Chief Okwudi.

Fayose to Obasanjo: You’ve no moral right to accuse anyone of corruption