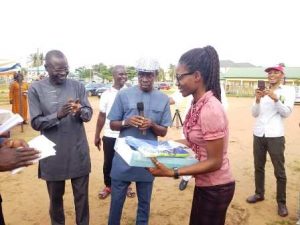 Oshimili South LG A Chairman, Mr. Uche Osadebe presents gift to the best all round student of the Okowa Free Extra Mural Lesson, Miss Ekweoba Calister. With the is the DG, Mr. Sunny Orisedare. 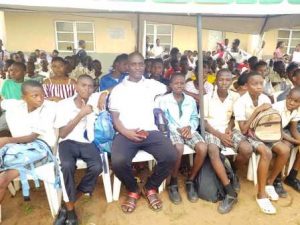 A cross section of some of the students of the Okowa Free Extra Mural Lesson at the Friday event.

The seed of making impact in the lives of the less privileged to acquire education through the establishment of extra mural classes sown by the Team SMART Okowa has grown and yielding commendable fruits.

Started in 2015 as an idea to make contributions that will be impactful with a positive turnaround effect in the lives of children who for financial reasons could not fulfill their dreams of attending lessons after normal school hours, the Team SMART Okowa began a programme, the Okowa Free Extra Mural Lesson.

The programme which is being organized in all the 15 local government areas of Delta State has seen no fewer than 6,000 students pass through this programme, Mr. Sunny Orisedare, the Director General of Team SMART Okowa revealed.

Yesterday, May 24, 2019, the group held an awards session for the beneficiaries of the free lesson at an impressive gathering at the Uzoigwe Primary School, Nnebisi Road, Asaba, with awards given to the student who emerged as the overall best student in the Senior Secondary category, Miss Ekweoba Calister, of Zappa Mixed Secondary School,  the second person, Master  Amazon Ikechukwu, while  Miss Mbanabor Faith from Asagba Mixed secondary school, Asaba  came third. 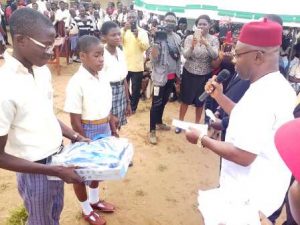 At the event in which the Head of Service, Mr. Reginald Bayoko, a major pillar of the Okowa Free Extra Mural Lesson in Delta State was represented by Mr. H.N. Odum, Orisedare regretted the attitude of  non-challance displayed by the political class to the programme.  “My message is that the political office holders in the local government areas should have a rethink and support this programme. We asked them to separate the programme from politics because it is to help build a future for the children who are the next generation.

The Chairman of Oshimili South Local Government, Mr. Uche Osadebe, who was on hand to present one of the awards to the brilliant students commended the programme saying that “It is a nice thing people who could not afford education can come in to acquire.”

Answering questions from journalists, Mr. Osadebe pledged to help move the programme forward. He called on the leadership of Team SMART Okowa to be in touch with us. ‘We expect that they will write to us so that we can be able to drive it.”

The State Director of Studies of the Okowa Free Ectra Mural lesson in the State, Olisa Ben Uche told the audience that the Extra mural lesson is an initiative of the Team SMART for Okowa in collaboration with the Ministry of Basic and Secondary Education, to give free lesson to students of JSS 3 and SS 3 preparing for the certificate exams such as BECE, WASSCE, NABTEB, JAMB (UTME) etc., across Delta State.

Pointing out that the lesson is to complement the fourth key word in S.M.A.R.T Agenda which is relevant health and educational policies of Okowa administration, he said the programme commenced in April 2017 with pilot centres in Oshimili South, Asaba in Uzoigwe Primary School, Zappa Mixed Secondary School and Ahabam Primary School.

“The Okowa Free Extra Mural Lesson is sponsored by the Team SMART in conjunction with elected office holders, political appointees and philanthropic individual from all the respective local government area. By the grace of God, the lesson is operational in 15 centres across the state as at January 2o18. These centres are located in these local government areas – Oshimili South LGA, Ika North East, Ughelli North, Patani, Aniocha North, Oshimili North, Ndokwa West, Okpe, Ukwani, Ethiope East, Isoko North and Sapele,” Uche said.

To ensure standards in the programme, experienced teachers were selected from both public and private schools within the localities where these Centres are located to teach the students. “This was further strengthened with regular deployment of Corpers by the directorate of NYSC, Delta State after inspection and assessment of its benefit to the students, parents and the state generally,” the Director of studies disclosed.

He said: “within the period, 9,863 students have passed through the programme while 14,648 students are currently participating in the programme with lots of testimonies of how the programme has helped students to perform excellently in their external, internal and certificate examinations. Parents are not left in their testimonies of the benefit which include engaging the students/wards after the normal school hours and also safe-guide them against possible negative social vices. In the words of a parent, ‘With this lesson, we now know where our children go to after school hours’,  thanks to Okowa Free Extra Mural Lesson

Therefore, like the Director General of the programme, Mr. Orisedare, Mr. Uche also pleaded with philanthropists and the State government to support the programme for the benefit of “our children” in Delta state who are in dire need of such help. “The government should please take up the sponsorship of the programme and endeavour to plant a centre in each local government area,” Uche said.

He thanked the Head of service, Mr.Reginald Baoko for the support given to the Centre in Uzoigwe Primary School, and to the Director General Mr Orisedare for the human capacity building initiative that would ensure excellent outing for the students in future examinations.

Present at the event were Mrs Joan Nwanji, the Chief Inspector of Education for Oshimili South who represented the Commissioner for Basic and Secondary education, and Pastor Philip Orubisi, a Patron of Team SMART for Okowa. Highlight of the programme at the event was the presentation of awards to Mr. Bayoko, the DG as well as live performance entertainment presented by the students.