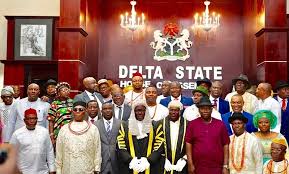 Members of the 7th Delta State House of Assembly shortly after inauguration.

The Seventh Delta State House of Assembly was inaugurated today, with the Rt. Hon. Sheriff Oborevwori emerging again as the Speaker following a unanimous endorsement that was unopposed. It passed its first motion.
Similarly, Hon. Ochor Christopher Ochor, former Executive Director of the Delta State Oil Producing Areas Commission (DESOPADEC), was also unanimously elected as the Deputy Speaker at a colourful ceremony in the Assembly chambers witnessed by a bevvy of gaily attired Deltans from all walks of life.
The inaugural process began with the procession that ushered in the Clerk of the House, Mrs. Lina Ocholor and with the Mace in place. She announced the receipt of a letter from the State Governor, Dr. Ifeanyi Okowa, who acting on the exercise of the power conferred on him by Section 105 (3) hereby proclaimed the constitution of the Seventh Assembly.
Accordingly, all the 29 elected members into the seventh House of Assembly were called and they responded by standing up to acknowledge their presence. Thereafter, they all presented to the clerk of the house, photocopies of their certificates of return issued to them by the independent National Electoral Commission (INEC) and their completed code of conduct forms.
Then the Clerk called for the nomination of the Speaker and the deputy speaker. Hon. Tim Owhefere nominated Sheriff Oborevwori, his nomination was seconded by Hon. Chuks Okoh (Ika South). There was no opposition, and all the members endorsed him by a unanimous vote with the show of the hand. Accordingly, was declared duly elected as the Speaker.
Hon. Ochor Christopher Ochor for the post of Deputy Speaker was nominated by Hon. Anthony Elekeokwuri (Ika North East) and seconded by Hon. Reuben Izeze (Ughelli South). Ochor was also unanimously endorsed by his colleagues without opposition.
Both Oborevwori and Ochor were sworn-in by the Clerk of the House, Mrs Ocholor.
Oborevwori then took over the control of proceedings as the Speaker and went ahead to administer the oath of office on the other members. He thanked his colleagues for their magnanimity in entrusting him with the leadership of the House, with a promise that he will not disappoint them.
Before adjourning till next Tuesday, the lawmakers passed the first motion moved by Hon. Kenneth Preyor and seconded that by Hon. Emeka Nwaobi (Aniocha North) that the Clerk should inform the Governor that Rt. Hon. Sheriff Oborevwori has been elected the Speaker of the Delta State House of assembly and Hon. Ochor Christopher Ochor as Deputy Speaker.
Also, the Clerk should inform the Governor that the House of Assembly is now fully inaugurated to receive any message from the Governor. The house then rose and was adjourned till Tuesday, June 18, 2019, in a motion moved by Hon. (Mrs) princess Ajudua (Oshimili North).

PERSPECTIVE – We need to open up our economy, not close it

Crue! Chilling, confessions of the callous: How we killed Elozino Ogege, by the gang...