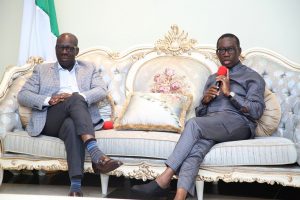 Okowa and Obaseki at the talks in Asaba. 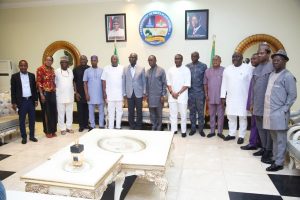 Delta State Governor, Dr Ifeanyi Okowa and his Edo State counterpart, Mr Godwin Obaseki cut short their salah holiday today (05/06/19) to brainstorm on how to deepen economic ties and improve on the security situation in the two states.

Obaseki arrived at Government House, Asaba with members of his executive council at about 1.06 pm and was received by Governor Okowa and his team. The meeting went into the closed door and lasted for about 45 minutes before they were joined by Journalists.

Okowa said: “It was a meeting between brothers, friends who are now Governors and more interesting is that, our states belonged to the old Bendel and he came with ideas that will move the two states forward.”

While clarifying that it was not the first time the two Governors were meeting to discuss in a convivial atmosphere, Governor Okowa hinted: “We want to leverage on our strong ties as members of old Bendel State to better the lot of our people.”

Obaseki, the Edo State Governor in a brief speech stated that it was important for the Governors of two states to discuss the issues of common interests such as economy, security, energy, the Niger Delta Development Commission (NDDC), among others bearing in mind that both states share the longest boundary and their historical background.

“I am here to congratulate my friend and brother for his victory at the polls and successful inauguration for a second term; we came from the legacy Bendel State; we discussed economic cooperation between our two states.

“Today, Edo and Delta States could be the main power house of the country giving our energy and agricultural potentials. We looked into how to strengthen our economic ties and our participation in Bayelsa, Rivers, Akwa Ibom, Cross Rivers, Edo and Delta (BRACED) Commission,” he said, disclosing that, “We looked at insecurity in our common borders, especially, communal clashes and general insecurity and we have agreed to ask the Assistant Inspector-Gerneral of Police and the Commissioners of Police to come up with a plan to restore security in our states,”

He said further: “We also agreed to ask for the inauguration of the NDDC advisory committee of Governors and to work with our colleagues to improve governance in the Commission. We are of the view that based on the resources the Commission receives, there the is need for improvement in project conception, citing and execution because nothing stops the Commission from using 50 per cent of its resources to solve the energy problem of the region.

“Also, a regional Master Plan is necessary for implementation by the NDDC and we also looked at the area of energy as Delta, Edo, Ondo and Ekiti States are major stakeholders in BEDEC, so, we need to be proactive to strengthen BEDEC to provide electricity to our people and restructure the company so as to make it work efficiently for the region,” Mr Obaseki said.

Students shut down South Africa’s Shoprite in Ogun over Xenophobia