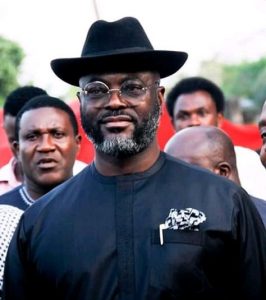 Dumo Lulu-Briggs.
The Supreme Court today, Thursday June 20, 2019 struck out an appeal brought before it by one Precious Baridoo against the 29/04/19 judgment of the Court of Appeal given in favour of Chief Dumo Lulu-Briggs as the Rivers State governorship candidate of the Accord in the just concluded 2019 elections.

The case came up last Thursday, June 13, 2019 at the apex court for the motion of abridgement of time and accelerated hearing which was granted and the counsel asked to come today the 20th instant to adopt their briefs and argue their cases.

When the case was called today, the lawyer to Chief Dumo Lulu-Briggs, Wilcox A. Abereton SAN requested the court to ask Mr. Baridoo what he stands to benefit from the case, considering that he did not contest the primaries of the party and also did not contest the governorship election, having openly withdrawn and enMrsed the then PDP candidate, Governor Nyesom Wike.

Wilcox Abereton SAN argued that Baridoo’s appeal was an abuse of court process and a waste of time of the court, saying that Mr. Baridoo has nothing to lose in the matter except to waste the time of the court.

When asked, the lawyer to Baridoo said they were in court just to set the records straight, an answer which drew the anger of the Supreme Court judges. They said the court is not here to settle intra-party matters but to determine who is the Rivers State Governorship candidate of Accord party and if the Court of Appeal has given its ruling what benefit would he (Baridoo) get if the Supreme Court rules in his favour, having not contested the election.

The Supreme Court judges said that the court is not created for academic exercises and advised Baridoo and his lawyer to go to the University of Abuja to pursue academics if they so desire because the Supreme Court is for serious business.

Baridoo was urged not to waste the time of the court and advised to withdraw the appeal otherwise they would enter judgement against him with costs of over N10million. At this point Baridoo’s lawyer quickly apologized to the court and withdrew the appeal. The Supreme Court therefore struck out the appeal.

Political watchers wonder why the sponsors of Mr. Precious Baridoo dragged this matter up to the Supreme Court, considering that the peace-loving Chief Dumo Lulu-Briggs did not even file a petition against Gov. Nyesom Wike at the Rivers State Governorship Tribunal. The only reason they say, is that Governor Wike as a shrewd politician, is merely being proactive, in case he loses his election at the courts, he would want a re-run with political lightweights and not a man of Chief Dumo Lulu-Briggs’ status.

PERSPECTIVE – Why APC politicians are terrified by e-transmission of votes

Fulani herdsmen’s menace in Ika land: Be careful in your movements in society, Obi...