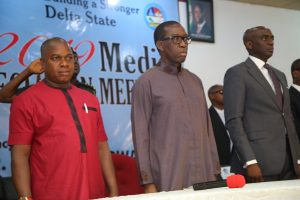 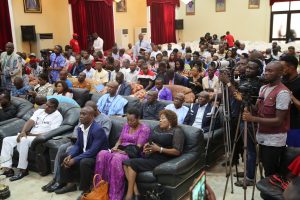 A cross-section of journalists at the meeting.
At the meeting on the recurring problem of security in the country called by President Muhammadu Buhari with Governors in the country tomorrow, we expect a very strong statement from the Presidency, Governor Ifeanyi Okowa of Delta state has said.
The Governor dropped the hint of the meeting while answering questions from journalists at a Media Appreciation Meeting he called to acknowledge journalists in the state for the roles played in his first term and in particular his electioneering campaigns and ultimately his re-election for the second term as the governor of Delta state.
Responding to the question on what his administration is doing to stem the growing and disturbing incidents of insecurity occasioned by the unwholesome activities of herdsmen that have surrounded and seized the bushes, attacking, killing farmers, raping women, kidnapping and open up camps in the bushes where they have piled up huge deposits of arms and ammunition, causing insecurity everywhere, Governor Okowa said: “It is very unfortunate where we have found ourselves as a nation on the problem of insecurity.
While clarifying that Delta state is not in the class of places classified to have high-security issue he said: “The issue of security has now come to the fore and everybody is getting agitated. The President has called a meeting of all the governors for a meeting to discuss the issue and we expect a very strong statement from the presidency. The fact that people can’t go to their farms is very worrisome.”
Governor Okowa in answer to another question clarified that it is not true there is a plan to ban keke operation in the state. He said: “I have not contemplated banning keke. To even contemplate that you must talk of alternatives.”
The governor explained that putting transport vehicles on the road is very expensive, even taxis are expensive, pointing out that “until we have solutions in terms of alternatives we have never thought about banning keke.
Governor Okowa also expressed concern on the country’s growing population against the background of the economy that is slowing down and not growing. “This to me is a recipe for a crisis,” he said.
While acknowledging the journalists for attending his Media appreciation meeting, he said: “I must thank Deltans in general and thank you (Journalists) for reporting our activities; at every point in time, before, during and after the campaigns, you were with us, even some of you who were afraid of water, were with us in the creeks.
“I appreciate the roles Journalists are playing in my government; we are partners in progress and that partnership should continue. As we start our second term, I ask that you continue to partner with us. We are not asking you not to report correctly, but we are asking that you ensure accurate reporting. If there is an issue that requires clarification you can reach me, the Chief Press Secretary or any of the political appointees because we have an open-door policy where all Journalists, every Delta has the right to be contributors to good governance. As much as possible, I will be frank with our people.
“From our visits, it was obvious that our people in the creeks need a lot of government attention which will make them happy and we are determined as a government to provide infrastructure in the area for our people who are in those areas to be comfortable.”
He declared also that in his second term, “we shall take interest in the training of the girl child. We hope to upscale our health care programmes. We plan to ensure that the 270 primary health care centres in a way that will make us have at least on health care centre in every ward in this state.”
Besides, Governor Okowa expressed disgust with the attitude of people to waste disposal in the state, and appealed to journalists help inform the people about the need to partner with government in the area of refuse disposal and sanitation.
“We will also continue to pursue a few more things like oil and gas and agro-industrial park functional with our partners,” he hinted, pointing out that the Asaba Airport runway has been delivered, and “we are trying to bring down the hills, and so far one international flight have taken off directly from here; Ughelli-oleh-Kwale Road will be delivered; the storm drainage project, unfortunately, the contractor has not been able to keep to time.”
He said the contractor has pleaded to be given more time to overcome the challenge currently being encountered.
Journalists who spoke at the occasion including National Vice President, South-South of the Nigerian Union of Journalists (NUJ), Comrade Edward Ogude, Chairman of NUJ Delta State Council, Comrade Mike Ikeogwu and others commended Governor Okowa’s administration for its media-friendly posture, assuring that they will continue to ensure credible reportage of his administration’s activities. 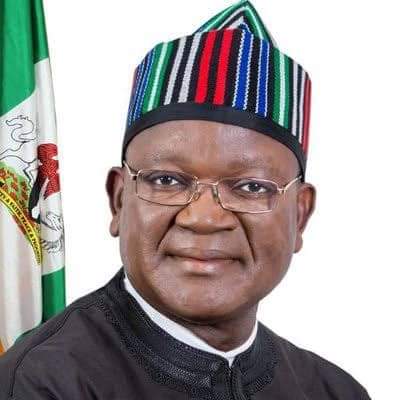 Reps Minority Caucus alarmed over assassination attempt on Gov. Ortom; insists masterminds must be fished out

2019: Atiku declares presidential bid, tackles Buhari, says Nigerians are more divided today than at any other time in history

8 feared dead as 2 vehicles plunge into river in Warri