Home Football What I learnt from Super Eagles, by Zimbabwe Warriors’ coach; for the... 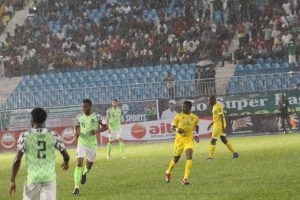 By Chukwudi Abiandu
“I have learnt a lot from the Super Eagles of Nigeria. I learnt from the Super eagles how they move to the goal area of their opponents and how they take possession of the ball and hold on to the ball. I learnt a lot.”
That was the response of the Coach of the Zimbabwe National Football team to the questions posed to him at the post-match press conference at the Press centre of the Stephen Keshi Stadium, Asaba after the rain filled international friendly football play between the Warriors of Zimbabwe and the Super Eagles.
Although the match ended in a goalless draw under a heavy downpour of rainfall that lasted the entire 90 minutes of play, yet the Zimbabwean coach was full of eulogies for the Super Eagles, saying: “The Super Eagles is a good team.”
And to underline the effect of the rainfall during the Zimbabwe-Nigeria soccer match, the Super Eagles sweat merchant, Mr.Rohr to journalists “so much rain. For the first time in Nigeria, I was cold. All the players deserve congratulation. It was not an easy match.”
Rohr said he was very pleased with the match because it has prepared the players and the technical crew for the international tournament ahead.
Super Eagles captain, John Mikel Obi agreed with his coach, saying that necessary adjustments would be made as the team plays in friendly matches as they did in Asaba that it is with the coach and the technical crew to determine the areas of necessary changes and adjust accordingly.
Responding to another question, Obi said: “I am motivated. If I am not I won’t be here.”
The encounter was despite the rainfall an interesting event in which the football lovers in Asaba and environs were entertained with scintillating football by both teams.
While the Super Eagles showed class as an experienced team containing their opponent’s daring moves, the Zimbabwe Warriors proved that they are a hard fighting team, as they made desperate incursions into the Eagles vital area.
Skilled, resourceful and resilient Chukwuwueze of Nigeria was all over causing anxious moments for the Warriors in their goal areas, he missed scoring a goal in the sixth minute of play. He was substituted in the second half with Onyekwuru, while Mikel Obi was also replaced in the dying minutes of the game.