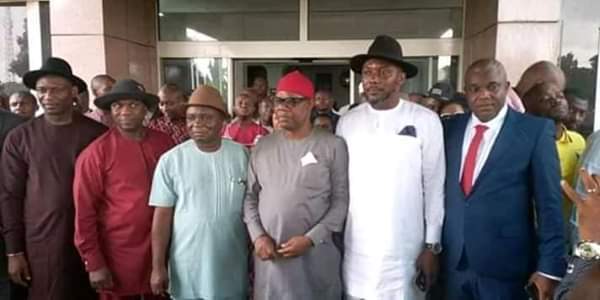 DTHA screens, confirms another round of commissioners

Some of the new commissioners confirmed by the House of Assembly.

By Janet Okolosi Wojuola
The Delta State House of Assembly has screened and confirmed seven more Commissioners today, Thursday, 11/7/2019.
Those confirmed were Engr Lawrence Chuks Ejiofor from Aniocha South, Barry Pere Gbe from Bomadi, Julius Egbedi, Sapele Local Government, Fidelis Okenmor Tilije, Churchill Ifoghale Amagada from Isoko South, Arthur Akpowowo of Ethiope East and Rt Hon Martins Okonta of Ika South.
This is the second list of commissioners to be sent to the House.
Rt Hon Martins Okonta, a former speaker of the House of Assembly had the singular privilege of being called in first, even though his name was at the rear, introduced by Hon Chukwuyem Okoh member representing Ika South in the House as a loyal party man with a first and second degreesd in Law from the University of Benin, a one time student union president and a doctorate degree holder was the Special Adviser to Senator Ifeanyi Okowa on Legislative Matters at the 6th Assembly.
As a non sitting member of the House, he was asked to take a bow and leave.
Lawrence Chukwuma Ejiofor from Ubulu Ukwu was a one- time Special Adviser on Project Monitoring to the Governor, he was asked whether he was a member of the Nigerian Society of Engineers (NSE) to which he answered in the negative.
Chief Barry Pere Gbe a linguist and UNIBEN graduate has four Masters Degrees in different fields with a Ph.D. He was a banker before he ventured into politics in 2014. He has served in several campaign committees and was member representing Delta South in Delta Board of Internal Revenue (DBIR) in 2015.
Dr Pere Gbe was described to be characterized as forceful and intelligent with broad academic capacity, a trail blazer, team player, humble and a grass root mobilizer. He was introduced by Hon Keneth Preyor, member representing Bomadi Constiruency.
Julius Egbedi who is also a UNIBEN graduate, also has a Masters in Public Administration was a one time Vice Chairman of Sapele Local Government and SSA to the Governor of Delta State on Agriculture, he was said to be a loyal party man who served in the PDP campaign organisation in the last election.
Hon Fidelis Tilije from Ukwuani was introduced by the Deputy Speaker of Delta State House of Assembly, Rt Hon Ochor Christophet Ochor as an experienced finance and human manager, an astute politician and a team player who served in the executive as Commissioner of Water Resources in Governor Ifeanyi Okowa’s first tenure. He was said to have contributed immensely to the Party’ s success in the last elections.
Churchill Ifoghale Amagada from Isoko South was introduced by Hon Kenneth Ogba and Majority Leader Hon Tim Owhofere who pleaded that the nominee be favorably received knowing that he would not stand in for the wrong person.
Olorogun Barr Arthur Akpowowo from Ethiope East who is of the PDP family is being represented by an opposition party member, Hon Innocent Anidi of the APC who despite the party’s difference spoke well of the nominee as a brother and a grass roots mobilizer
Majority leader Tim Owhefere moved a motion for the nominees to be confirmed while Julius Egbede representing Sapele constituency seconded the motion for their confirmation.