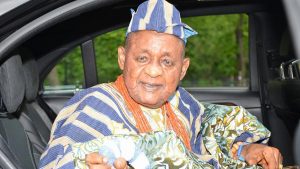 The Alaafin of Oyo, Oba Lamidi Olayiwola Adeyemi III, has written a letter to President Muhammadu Buhari on the negative effects of insecurity in the country, especially in the South West, warning that the pre-colonial military structures of the Yoruba have not totally collapsed.
The monarch, who lamented that more countries had issued restrictions on travel to Nigeria and parts thereof, said that it was just a matter of time for the country to lose whatever gains it had made in repositioning itself for more decisive participation in the international system.
He enjoined Buhari to take urgent steps to re-establish confidence in his government and demonstrate the capacity of the state to protect all legitimate interests.
The letter dated June 24, 2019, came about two weeks after an open letter was written on the same subject matter by former President Olusegun Obasanjo was made public.
In the letter entitled “Yoruba Question in Nigeria Conundrum”, Alaafin listed 17 salient issues threatening the corporate existence of Nigeria and could spell doom for the country if not pragmatically addressed without bias.
Oba Adeyemi said he had never ceased supporting the success of the Buhari administration to take the country to the promised land since he came to power on May 29, 2015.
The petition reads in part: “My confidence has always been based on Buhari’s ability, fitness, and competence in leading the country, to the promised land, where law and order prevail, individual liberty is guaranteed, the economic well-being of the citizens is assured.
“In recent times, however, I am worried about the security situation in the country, especially in the southwest geo-political zone, nay the entire Yoruba speaking area of the country, including Kwara, Kogi and Edo states.
“This has to do with the incessant and increasing menace of Fulani herdsmen that have laid siege to almost all the highways of Yoruba land. Whether in Owo, Akure, Ilesa/Ife-Ibadan road or Ibarapa zone and Ijebu area of Ogun State, the story is the same.
“I have held series of consultations with opinion molders and eminent Yoruba leaders across the board about the menace of these cattle herdsmen with such assault like raping of our women and on some occasions, in the presence of their husbands. That is apart from the massive destruction of our agricultural lands; which ultimately points to imminent starvation.
“On top of it all is the menace of professional kidnappers usually in military uniforms. What is more worrisome about the kidnapping notoriety is what looks like impunity with which these kidnappers enjoy their nefarious activities. After due consultations with Yoruba leaders and as the pre-colonial head of the Yoruba nation, we are worried by the audacity of these lawless people in effecting their illegal acts in broad daylight on our usually bushy highways without any arm of security being able to do anything.
“Worse still is the confidence with which they demand ransoms and collect such illegal levies at designated spots without any arm of security being able to lay siege to such places to arrest the criminals.
“Now, we cannot even talk of parading suspects, when in actual sense, no major arrests have been made in this part of the country. Without arrests, we cannot talk of the criminals facing the law. Unfortunately, and painfully indeed, all these happen in the face of the apparent helplessness of our security agencies: where do we go from here?
“It is at the wake of this manifest frustration that our people have found it unavoidable, even though reluctantly, to resort to alternative measures to safeguard their lives and property.”
He called for urgent actions against the insecurity to save the nation.
• The Guardian

Okowa: 60 Garlands for an indefatigable performer