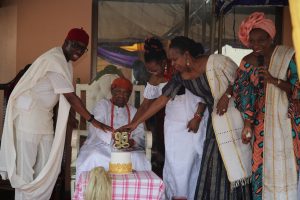 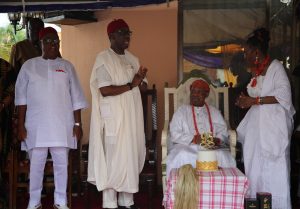 “Asaba is the fastest growing town in the nation and you have worked with your people to give us a peaceful environment for growth because, without peace, there will be no development,” Governor Okowa said, adding,

“You (the Asagba) have also given us room for partnership between the people of the town and government since the state was created and I must publicly thank the people of Asaba for keeping the peace.

“We have done a lot but, there is still much for us to do in Asaba; as a government; we will work with you to ensure that we grow Asaba better than it is today. As a government, we are committed to growing Asaba as the capital of our dream.”

Governor Okowa listed some of the projects executed in Asaba to include the Asaba International Airport which he disclosed plans are on through concessioining process for the cargo runway to be constructed.

“The Asaba Airport has the second best runway in the country today and we are looking forward to having partners that will make the airport a true international with a cargo wing,” the governor disclosed, stating that a Pleasure Park and a Nollywood Film Village were among the projects being constructed to add to the beauty of Asaba.

Governor Okowa while congratulating the Asagba on his birthday and 28th coronation anniversary, called for the support of the palace and the people to make Asaba cleaner.
The Asagba of Asaba had in his speech called on government to pay more attention to the development of Asaba as a state capital.

Prof. Edozien commended Governor Okowa’s administration for his efforts to give Asaba a befitting status as a state capital
High point of the occasion was the paying of homage by different traditional groups.

According to a statement the Governor on behalf of the government and people of Delta State joined the people of Asaba and Anioma nation, in celebrating the nonagenarian monarch and the oldest living Professor in Nigeria on his 95th birthday and 28th coronation anniversary.

He observed that the monarch’s 28 years reign as the 13th Asagba of Asaba has witnessed tremendous improvement in community relations, peace and prosperity of his domain, Asaba.

The statement reads: “As one of the oldest traditional rulers in the country and the oldest living Professor, Governor Okowa extols the sterling leadership qualities of the royal father, which had over the years earned him numerous recognitions and awards.

“The Governor extols the maturity and wisdom of the royal father in administering his domain, consistently ensuring peace and development, and promoting a strong appetite for education and commerce among his people.

“Governor Okowa believes the nonagenarian has, over the years, successfully sustained the heritage of patience, tolerance and good neighbourliness that was bequeathed by his ancestors, and taken his people to new heights of integration into the global community.

The Governor affirms that the monarch has brought his solid intellectual pedigree and global exposure to bear on the leadership of the traditional institution which he inherited 28 years ago, adding that, “His Majesty’s pedigree has no doubt impacted positively in the modernisation of the Asaba traditional institution to accommodate the large influx of visitors as a state capital.

“Governor Okowa prays that the almighty God will grant the royal father longer life, good health and more wisdom to serve his people and humanity.”