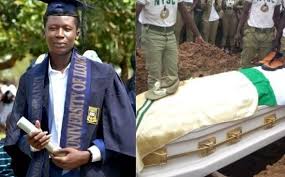 The Nigeria Police has been criticized for using archaic method of policing that places no value on human life by firing live bullets indiscriminately into crowds.

Media Rights Agenda (MRA) a non governmental organisation in a statement by its Programme Director, Mr. Ayode Longe, decried the Nigeria Police style of responding to protests and riots by firing live bullets indiscriminately into crowds, with a call on the Federal Government to probe the killing.

MRA on Tuesday, condemned the shooting to death in Abuja of 23-year-old Channels Television journalist, Mr. Precious Owolabi, a National Youth Service Corps (NYSC) member who was serving his primary assignment with the news organization and shot in the course of his professional duties.

Mr. Owolabi was reportedly hit by a stray bullet while covering the clash between the Police and protesting members of the Islamic Movement in Nigeria (IMN), also known as Shiites, and later died from the gunshot wound he sustained.

MRA’s Programme Director, Mr. Ayode Longe, said in Lagos that “this latest incident of needless death highlights once again the primitive nature of policing methods in Nigeria, which places no premium on human life and where police officers who are supposed to respect, preserve and protect human life respond to protests and riots by firing live bullets indiscriminately into crowds.

He said: “We are concerned that rather than adopt non-lethal incapacitating weapons in response to protests or even riots, the Nigeria Police has consistently demonstrated a preference for the use of excessive force in dispersing crowds during protests and quelling riots with the result that unjustifiable deaths frequently arise from such situations, including of innocents and bystanders.”

Mr. Longe urged the Federal Government not to encourage or condone impunity for such unjustifiable deaths by failing to investigate them or refusing to sanction wrongdoing and actions which violate the Law or established norms and standards.

He accordingly called on the Federal Government to institute an independent inquiry into the shooting of Mr. Owolabi to establish the precise circumstances of his killing and in particular whether the actions of the Police complied with the general principles governing the use of force by law enforcement agencies, namely necessity, proportionality and the duty of caution; and whether the conduct of the Police officers was consistent with applicable rules on the use of firearms by law enforcement officials.

Mr. Longe also called on the Federal Government to pay the family of Mr. Owolabi substantial compensation for his unjustifiable killing by agents of the State, saying that although it is difficult to put a monetary value on his life, such a gesture by the Government would signify recognition and appreciate of the loss and suffering caused to his family by his needless and untimely death.