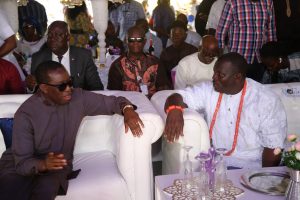 Governor Okowa, left, with Ochor at the latter’s father’s burial.

The remains of Chief Francis Anamali Ochor, father of the Deputy Speaker and the member representing Ukwanui constituency in the Delta State House of Assembly has been laid to rest at his town, Umutu, in Ukwanui LGA, amidst pageantry and glamour.

The event attracted some of the best Delta cultural display and traditional dances, and dignitaries from all walks of life to include the state Governor, Dr Ifeanyi okowa, members of the state House of Assembly, present and passed political appointee, members of the state oil producing area development commission , family members friends and well wishers.

At a funeral service organized in honour of late Chief Francis Anamali Ochor, the officiating pastor, Apostle Allen Emmanuel said everyone will experience death stressing that death was an inevitable end of every living being.

He added that at death believers will give account of how they spent their lives on Earth
According to him, total submission to God was the only way for eternity.
The grave side prayer was said by Pastor B,S ldogun, while the dust to dust rite was performed by the children of the deceased, and family members at the family compound.

In an interview with the first son, Rt. Hon. Christopher Ochor Ochor spoke on his father’s legacies and stressed the need for those left behind to emulate him
He described his late father as lovely, peaceful, and caring one would miss greatly.