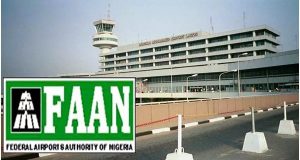 By Solomon Asowata
The Murtala Muhammed International Airport (MMIA), Lagos Police Command, has identified the man who climbed an Azman Air aircraft at the airport on Friday as Usman Adamu from neighbouring Republic of Niger.
The spokesperson for the Command, DSP Joseph Alabi, disclosed the identity of the 32-year-old Nigerien to the News Agency of Nigeria (NAN) on Saturday in Lagos.
Alabi said the Nigerien, who is currently being held by the command, could not speak or understand English Language.
He, however said investigation was still ongoing to ascertain how Adamu gained access to the heavily restricted area at the airport.
NAN reports that passengers aboard a Port Harcourt-bound Azman Air flight were thrown into panic on Friday after Adamu climbed the aircraft while it was about to take off at the MMIA.
According to video clips taken by one of the passengers, Adamu was seen entering the fuselage of the aircraft with a hand luggage and also climbing one of its wings.
He was later apprehended by Aviation Security Personnel of the Federal Airports Authority of Nigeria (FAAN) and taken to its detention facility, before the case was transferred to the Police for further investigation.
Following the development, FAAN gave an indefinite suspension to the Aviation Security Unit heads who were on duty when the incident occurred.
FAAN’s General Manager, Public Affairs, Mrs Henrietta Yakubu, had in a statement, said the agency viewed the breach as a serious security concern.
She said FAAN had begun investigation to ascertain the remote and immediate causes of the incident to forestall future occurrence.
Yakubu said the suspension of the personnel was pending the completion of investigation into the security infringement.
NAN reports that the affected officers include the Airport Chief of Security, Mamman Mohammed Sadiku, and International Terminal Security Office, Oni Abiodun.
Others are Head of Department, Domestic Terminal 2, Kenneth Okezie and Head of Department, Domestic Terminal 1, Adebowale Ayodele.
Yakubu disclosed that in the interim, a General Manager, Dr Anne Enyinnaya-Egbadon, had been detailed to take charge of security at the airport.
She explained that other affected officers had also been replaced.
She said the current arrangement was aimed at ensuring an efficient and thorough investigation toward the recovery and sustenance of the airport’s proactive security integrity. (NAN)

Soyinka: I need a psychiatrist if I join Obasanjo’s coalition