Home Latest News Soyinka to Buhari: You are careless, negligent; you failed Nigeria 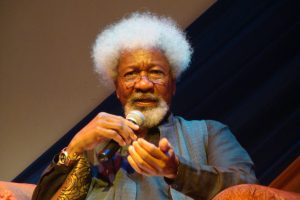 Nobel Laureate, Professor Wole Soyinka, has in Abeokuta at the weekend castigated President Muhammadu Buhari for being careless and negligent in the handling of the problems confronting Nigeria.
Speaking while hosting 85 pupils drawn from the six geopolitical zones to mark his 85th birthday, at his Ijegba home, in Abeokuta, the Ogun State capital, Soyinka said the lapse has cost the country a great fortune in the death of many Nigerians.
Pointing out that Nigeria’s problems are beyond Buhari, Soyinka said that the president’s failure to tackle the activities of marauding herdsmen has wiped away the positive achievements of his administration.
Soyinka said: “The problems of this nation are beyond the solution that can be offered by this government, that’s the first admission; they have to stop thinking in partisan government.
“There has always been a major problem with successive governments. It’s easier at the state level to say that a particular state is definitely doing better than another state. But the central government has failed, that’s my view. “There is a minimal level which any government, which has been elected to power, must achieve to be considered a true representative of the people.
“Look at what’s happening today with cattle all over the place, that’s a security issue, which should never have reached this level. That singular act has resulted in hundreds of people being killed, farms were taken over; it has wiped away a lot of the positive achievements of the government.
“They need to confront this nation as a habitation of human beings where very serious issues like economy, security, health, even threats of secession come up every day and convoke at the same time, a national conference, what I call an Indaba, across all section, which we will all meet and debate everything, including the economy of this nation.”
On governance in Nigeria, Soyinka said: “Governance is a very difficult occupation, Nigeria is a very complex nation for a lot of reasons; its history, the background, the formation of it, the complexity, the culture, balancing here and there and then, you have several complications like fuel, among others.
“Politicians that money has gone into their heads, misdirect themselves in terms of priority, they neglect some sections. Some of them are nepotistic and some of them alienated themselves from the public which is the people they are supposed to serve and govern.
‘’They think they are still colonial masters, especially, when we went through the military period.”

Weep not for Fayose, weep for Nigeria

Any hope for the Nigerian retirees?