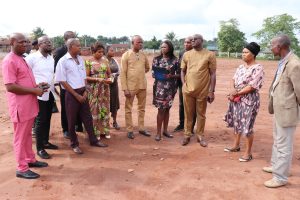 Ukah, third from right, speaking during the visit to schools.

The Delta State Commissioner for Basic and Secondary Education, Chief Patrick Ukah, has warned School Heads in public secondary schools in the state to stop the practice of engaging their students in labour exercise just before the commencement of their examinations.
Chief Ukah gave the warning after he rounded off the monitoring of the conduct of 2019 promotion examination which ended on Friday, 19/7/2019 in the state.

He expressed surprise that students, who were scheduled for an examination by 9am, were being engaged by some school authorities in manual labour exercise before writing their examination, pointing out that the exercise would stress out the children and could make them not to perform well in the examination because of fatigue.

He, however, advised the Principals of affected schools to come up with a better strategy to engage the students in labour exercise at the beginning of each term or after the examination.

Chief Ukah cautioned School Heads to desist from the habit of collecting money from students to buy foolscap sheets to write examinations; instead, he said the students should be made to provide them for the school authorities to stamp for authentication.

The Commissioner also frowned at the shortage of question papers for the examination in some of the schools and directed that it should be investigated and a report be sent to his office this week.