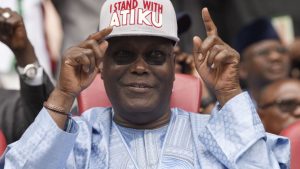 The media office of the Presidential Candidate of Peoples Democratic Party in the 2019 presidential elections, Atiku Abubakar says that the travel ban by the United States on Nigerians responsible for undermining democracy in the country is a validation of claims of electoral malpractice in Nigeria.

The Media Adviser to Atiku, Mr. Paul Ibe in a statement in which he called attention to a statement by the US State Department condemning politicians whose acts of violence, intimidation or corruption undermined Nigeria’s democratic process, said it seems that the Buhari regime is now faced with the truth after months of living in denial.

Below is the full text of the Atiku media office statement.

After the conduct of the February 23, 2019 Nigerian Presidential elections, we maintained that the polls were rigged, not credible and that former Vice President Atiku Abubakar won the elections and that his mandate was stolen.

In the aftermath of the daylight robbery that occurred on Election Day, the regime of General Muhammadu Buhari and its allies went into a propaganda overdrive to deny the obvious. However, it is a truism that no matter how far and fast falsehood, or in this case, rigging, has traveled, it must eventually be overtaken by truth.

It seems that day has come. After many months of living in denial, the Buhari regime is now faced with the truth in the form of a US visa ban on politicians who undermined Nigeria’s democracy.

Speaking on the ban, the US State Department in a statement by its spokesman, Morgan Ortagus on Tuesday, July 23, 2019, stated that “we condemn those whose acts of violence, intimidation, or corruption harmed Nigerians or undermined the democratic process.”

Speaking further, Mr. Ortagus said, “The Secretary of State is imposing visa restrictions on Nigerians believed to be responsible for, or complicit in, undermining democracy in Nigeria. These individuals have operated with impunity at the expense of the Nigerian people and undermined democratic principles and human rights”.

The above statement is a vindication of our position that the 2019 elections were “undermined” by the actions of state actors and institutions.

We also wish to thank the United States of America for standing with the Nigerian people against those whose desire it is to truncate our democracy.

Finally, we urge the Nigerian people not to despair. There is hope on the horizon. There is light at the end of the tunnel. The myriad of security, economic and social challenges Nigeria currently faces, which has resulted in our nation becoming the world headquarters for extreme poverty will, God wiling, soon be over, with the prospect of purposeful and result oriented leadership.