Home Delta State Why we are giving appointments in batches, by Okowa; swears-in 8 Special... 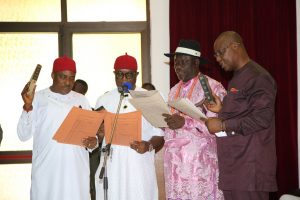 Some Special Advisers taking the oath of office. 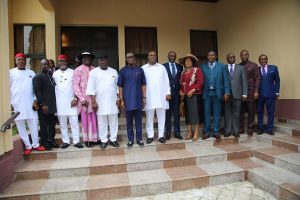 Okowa with the advisers.

Determined to have a formidable team to build a stronger Delta State, Governor Ifeanyi Okowa has sworn-in eight Special Advisers, saying that the appointments are coming in batches to ensure that the right set of persons are fixed into the right positions.
“I believe that the process of political appointments is continuous and appointments will come in batches because, we are all aware that there is room for a lot of people to be given political appointments, but, it is not possible to appoint all Deltans into office,” he said.
Those who were sworn-in as Special Advisers at the event which took place in Asaba today (17/07/19) include Chief Edwin Uzor, Hon. Pascal Adigwe, Comrade Mike Okeme, Prince Kelly K. Penawou, Chief Mary A. Iyasere, Hon. Johnson Erijo, Hon. Daniel Yingi, and Barrister Ernest Ogwezzy
“The appointment and swearing-in of this set of Special Advisers further demonstrates this administration’s determination and collective resolve to put in place a viable machinery of governance, which will assist in meeting the challenges of repositioning the State towards achieving our vision of a stronger Delta,” the governor said, adding, “the appointments we are making are premised on professionalism, merit and competence and I urge those who are yet to be appointed to be patient because, all those who worked will be rewarded in one way or the other; please, keep praying for me and the administration.”
He admonished the Special Advisers and other political appointees in his administration, to acquaint themselves with the policy direction of his administration, while the appointments should facilitate professional and technical input into the decision making process of government.
“I encourage the newly sworn in Advisers to bring in their wealth of experience to bear, so that the tempo with which the government is pursuing its various projects and programmes, gets accelerated; they should demonstrate exemplary leadership qualities and carry the people along, and see the appointments as opportunity to serve the people by becoming bridges between them and the government so that their yearnings and aspirations can be satisfied,” he stated.
While urging the appointees to be people-friendly, Governor Okowa emphasized that his administration was addressing the challenges of sustainable development in all ramifications.
Chief Edwin Uzor on behalf of the appointees thanked the governor for considering them to be part of the team to build a stronger Delta State, stating, “we identify with your {Governor Okowa’s) vision and we will work with you for the desired objectives to be achieved.”

NLC to workers: Vote out Governors who default in payment of salaries