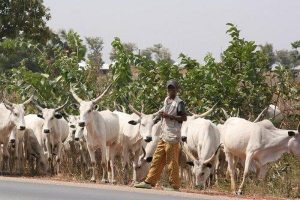 Herdsman and his cattle. 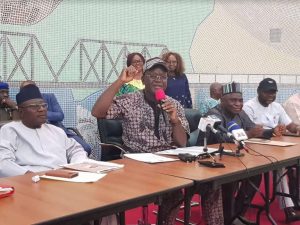 By Harrison Arubu
Governor Samuel Ortom of Benue on Saturday in New York said no fewer than 81 herdsmen had been convicted and 3,000 cows seized under the state’s anti-open grazing law.
Ortom, who gave the update in a keynote address at the 2019 annual convention of the Idoma Association USA, said implementation of the law had brought relative peace to the state.
“We are implementing our law, and there is relative peace. As at today, we have convicted 81 herdsmen. Some have paid fines; others are still in prison as I talk to you.
“We have gone a step further. Anywhere we see cattle doing open grazing, we go after them. So far, we have arrested over 3,000 cattle.
“The law stipulates that within seven days, owners of such cattle should pay fines and reclaim them. We have been collecting fines from them,’’ he said.
While insisting that ranching remained the best solution to the farmers/herders conflict, the governor challenged anyone with a better alternative to bring it forward.
Ortom spoke on the topic, “Security and Economic Challenges in Benue State’’, which was a modification of the theme of the conference that centred on Idoma land.
He said all parts of the state were facing similar development challenges, including insecurity, infrastructural deficit, unemployment, health and sanitation issues, among others, hence his decision to broaden the scope.
The governor said only four of the 23 local government areas in the state, namely Otukpo, Konshisha, Ushongo and Vandeikya, were spared of conflict between locals and herdsmen in the last six years.
“As at today, herdsmen have attacked 19 of the 23 local governments in Benue, claiming over 5,000 lives between 2013 and 2018.
“Over 195,000 homes and 30 churches worth billions of Naira were destroyed in the attacks,’’ Ortom said.
He thanked Idoma people in the U.S. for their support to victims of the Agatu attack in 2016; award of scholarships to Benue students, among others.
The governor also lauded them for being of good conduct, noting that to the best of his knowledge no criminal case or report had been brought against them.
Ortom used the opportunity to brief his hosts on the policies, programmes and projects being executed by the state government under his leadership.
Meanwhile, Governor Ortomhas called on indigenes of Benue at home and in the Diaspora to unite against the security and economic challenges bedeviling the state.
Ortom made the appeal at the 2019 annual convention of the Idoma Association USA in New York at the weekend, with the theme, “Security and Economic Challenges in Idoma Land’’.
Noting that the state is “deeply divided’’, the governor emphasised the need for unity and cooperation among indigenes to resist alleged plans by herdsmen to take over their land.
He reiterated plans by his administration to constitute a truth and reconciliation committee to address the challenge of ethnic disharmony fuelled by the last general elections in the state.
The governors said: “Benue is deeply divided today. Elections are over, so we must come together. As we go back to Nigeria, we should be able to set up the committee.
“I thank God for the Idoma nation, especially you here in America. But while we look at the Idoma agenda and the Tiv agenda, for me as governor, it will be a thing of joy to also look at the Benue agenda.
“I believe that if the leaders of the Idoma and Tiv come together at one forum to prosecute the Benue agenda, it will help us all because we are members of the same family from Benue State.’’
Sen. Abba Moro (PDP-Benue South) blamed the elite for the ethnic divisions in the state, noting that the average Idoma and Tiv people had nothing against one another.
“It is not by accident that we have been put together in Benue state; God has a reason for it.
“So, to fulfill that will, we must work together and support ourselves to be able to rise and defeat our common enemies.
“As leaders, we must be able to cancel this mutual suspicion, animosity and mistrust among us, only then can we fulfill God’s will for us and our state,’’ he said.
Mr Godday Samuel, the member representing Apa/Agatu Federal Constituency in the House of Representatives, solicited support for the state government’s peace building and conflict resolution efforts.
Noting that development is impossible without peace, Samuel said “when we are united internally, external aggressors can never defeat us’’.
The President of the association, Mr Ogbole Abu, said the convention was designed to generate ideas that would assist government in addressing address the development challenges facing Idoma Land and by extension Benue.
Abu said the suggestions and recommendations would be made public through in a communiqué that would come with timelines on heir implementation. (NAN)

PDP to Buhari: You preside over a sanctuary of treasury looters, says Bichi’s confession confirms sleaze in the Presidency

PERSPECTIVE – The return of Luna and Gbagbo

Atiku to APC: You have failed, quits party