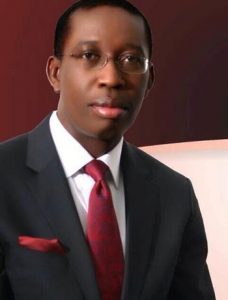 With the overwhelming cases of bad Federal roads that have become major sources of concern to the citizens, the Delta State Government today called on the Federal Government to come to the state and repair the many of its roads that are in terrible conditions of disrepair.

The call came from the Commissioner for Information, Mr. Charles Aniagwu at a press briefing by his Ministry of Works counterpart, Chief James Augoye who briefed journalists on the challenges occasioned by the rains that have limited the tempo of work on road projects being undertaken by some contractors.

Augoye, who was bombarded with questions on the terrible condition of Federal roads and why the state government is not intervening since it is the citizens of the state that are on the receiving end as a result of the bad condition of the roads said: “We have intervened on Federal Roads to mitigate the suffering that our people are passing through but the state government is not getting refunds for the money spent in repairing Federal Roads.”

On how much the Federal Government was owing Delta State, Augoye said the state government had been to the National Assembly to defend its construction of the federal roads and for payment, but that some amount was released in the form of promissory notes. “But for maintenance of the Benin-Sapele-Warri Road, no refund,” he said, pointing out that even the work on the Agbor-Eku Road, and Federal road has stopped because the contractor demobilized from site for lack of funds.

In his contribution, the Commissioner for Information, Mr. Aniagwu therefore, called on the federal Government to come and discharge its responsibility of repairing its roads for the convenience of citizens, as the state government does not have enough resources because it also has responsibility to deliver its projects to the people of the state.

Meanwhile, Delta State Government says it has awarded contracts for 15 roads in Okpanam community in Oshimili North Local Government Area.
The Commissioner for Works, James Augoye stated this at today’s press briefing in Asaba.
Urging the people to be patient and bear with the state government, which he said was aware of the discomfort being experienced said that the continuous desilting of the drainage at Asaba end was as a result of the sand carried by flood water coming from Okpanam axis, pointing out that the roads projects were awarded to control the huge sand that had filled the drainages.
Augoye said the contractor handling the Okpanam Road project had completed the drains on both sides of the road and was doing remedial work to enable residents use the road until the rains subsided when work on the road would commenced.
He appealed to the residents to be patient with the state government, saying that government understands their plight.
The works commissioner who debunked rumour making the round that the contractor handling the Asaba-Ase Road had demobilize from site stated that work on the road was ongoing
Chief Augoye said that the state government had no intension to abandon the project, even as he encouraged communities to take ownership of projects in their community and proper handling and standard completion of such projects.
He said that by taking ownership of projects in their community, the community would be able to monitor the contractor and engineers to ensure that there was no compromise in terms of standard, adding that deliberate action had been taken to ensure positive result in Asaba-Ase community road project.
Chief Augoye stated that due to the rains, government had agreed with contractor to construct only culvet/concrete work, and gave an assurance that the 7.2km Asaba-Ase Road project would be completed.
Explaining the reason for the delay in the completion of Ikpide-Irri Road, the commissioner stated that the his ministry discovered that the road needed drains on both side, saying the road was on low land and that state government had awarded the second drains on the road.
The commissioner who revealed that the Ministry of Works will only embark on long distance and highly technical roads that require proper investigation, said that the Asaba Capital Territory Development Agency and Warri/Uvwie Development Agency were in charge of short distance and internal roads in Asaba and Warri and environs for quick result.

ANRP to Mahmood Yakubu: Your INEC is backward; debunks self-acclaimed most improved institution status by chairman