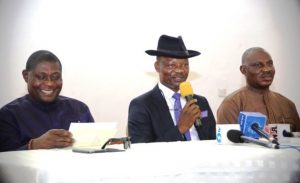 The Delta State Executive Council today, Tuesday, 6/8/2019 approved two additional storm water projects in Asaba as part of measures to check flooding in the state capital and its environs.
While the Okotomi Storm Water Project would cost N1.7 billion that of the Specialist Hospital Road Storm Water Drainages would cost N1.6
The Commissioner for Information, Mr Charles Aniagwu and his Ministry of Works counterpart, Chief James Augoye, speaking at different times made these known at a Post-Exco Briefing held in the Press Centre, Government House, Asaba.
Mr Aniagwu who was flanked by Chief Augoye and the Chief Press Secretary to the State Governor, Mr Olise Ifeajika, said that the State Exco also approved sensitization on the rising level of the river water to the low land.
According to Aniagwu, the National Emergency Management Agency (NEMA) reports from the Nigerian Meteorological Agency, NIMET, indicated that there would be another round of flooding this year due to the heavy rains and advised residents living in the low land to relocate to the upland to preserve their lives and property.
Aniagwu said that the state government was not relenting but had started preparing to relocate those who live in the flood prone areas to the upland and warehouses prepared for flood victims.
According the Information Commissioner, 17 local government areas are mostly prone to flooding in the state which includes, Oshimili South, Oshimili North, Patani, Bomadi, Ughelli South, Ughelli North, Isoko South, Isoko North, Warri North and Warri South West, Udu, Ndokwa West, Ndokwa East among others.
The commissioner said that the Government of Delta State would continue to sensitize residents and provide mitigating efforts to check the effect of flood on victims, calling on members of the press to join in the sensitization to alert as many people as possible.
The Exco, the commissioner added, also charged the Directorate of Science and Technology to deliver on its mandate outside procurement of equipment by bringing on board discoveries and inventions to bear in the technological industrialization of the state.
He said that the Directorate of Youth Development was also mandated by Exco to develop programmes that would add value to the teeming youths in the state.
Also approved by Exco, according to the information commissioner, was the concessioning of the Asaba International Airport to be managed as a revenue yielding outfit and optimize its operations to global standards for wider bodied aircraft.
While fielding questions on the management of the broadcast and publishing outfits, Aniagwu pledged to deepen progress on what his predecessor did to make them more optimally effective, maintaining that the state government would continue to remain transparent in what it does.
Giving details on approval for the construction of two more storm water drainage projects at Okotomi and the Specialist Hospital Road, Asaba, the Commissioner for Works, Chief James Augoye, stated that three had been completed and are successfully connected to the rivers and streams while the approved two are the fourth and fifth, explaining that when completed, the state government would commence the sixth one on Ibusa Road.
The commissioner who disclosed that while the Okotomi Storm Water Project would cost N1.7 billion that of the Specialist Hospital Road Storm Water Drainages would cost N1.6, saying that the Okotomi Project would involve the payment of compensation.
He announced that the flooding being experienced in Asaba would be a thing of the past when all the eight storm water drainages were completed even as he revealed that the coverings for the exposed manholes which pose danger to residents would soon be covered.

Presidency to PDP: Apology not enough, return your loot