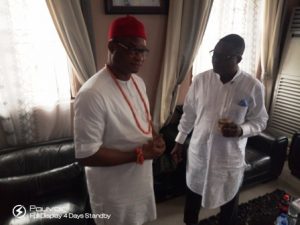 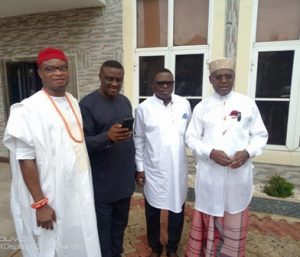 The people of Bayelsa state are in for a swell time of economic boom through the development of the critical infrastructure that will be put in place when Chief Timi Alaibe, an accountant, renowned technocrat, business guru and likable fellow gets the opportunity to mount the saddle as the next governor of the State.

Chief Alaibe made this known on Saturday 4th August, 2019 when he fielded questions from some Editors in the House of the Chairman and CEO of G&G Nigeria Limited, Chief Henry Ugbolue at Asaba, the Delta State capital.

The former NDDC boss hinted, that the direction of economic development he would be charting for Bayelsa will be to give the people of the state the benefit of reaping from the rich deposits of the Blue Ocean using the government as the enabler.

Looking agile and lively in a well trimmed Niger Delta white shirt with gold buttons, black pair of trousers and shoes to match, he was eloquent in his response to questions on what he would do in specific terms to build on the good legacies already created by Governor Seriake Dickson.

Alaibe said: “I have said this severally; the current Governor has done a lot in infrastructure, critical infrastructure development; in terms of building of schools, hostels and health facilities and so on. So we applaud him. When I take over as the Governor, I am going to build on what he started and then truly widen the scope of development in the State. My vision is to enthrone a shared economic prosperity.

“Bayelsa state has the longest coastline in Nigeria, yet it has not benefited from the activities of the ocean. The deep sea port opportunity that we have in a place called Agei, we have been unable to utilize it.”

He continued: “There is no road network to the ocean from creation of Bayelsa State; we cannot access the ocean by road. If that is the case, then if I must create the enabling environment which I need to use government as a spring board to create, I must be able to build infrastructure, critical infrastructure like the road network to the ocean on two major fronts; Brass end and the Agei end and that will open up Bayelsa to the era of economic opportunities that come from the blue ocean as prescribed and proposed or recommended by the world Bank.

The Bayelsa governorship hopeful, who was at the Asaba home of his friend, Chief Henry Ugbolue, a renowned businessman and communication strategist, spoke glowingly about his friend, Governor Ifeanyi Okowa and the highly rated personalities that abound in Delta state, Alaibe said: “Chief Henry Ugbolue, the Ekwueme of Issele-Mkpitime, is an epitome of success, you know that he is a very erudite scholar in his field of play; the act of journalism, he nearly made me a journalist. I became an editor with a small E in the process of working with him. But you see, that shows the quality of people Delta State has. The Governor, of course you know, is a world class medical doctor and you can attest to the fact that as the Governor of Delta State, he has made the State proud. The quality of a place is seen by the people that make up the place.

“So that is why, I was not in any controversy that I was first going to drive into Chief Henry Ugbolue’s house and enjoy myself before going to my primary place of purpose, but that is not for journalists and you are not suppose to tell them the level of enjoyment I had here in Ekwueme’s House,” Chief Alaibe said as the brief interview ended on the note of laughter. 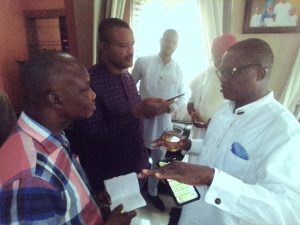 Osanebi to disburse N10M to indigent students, May 23