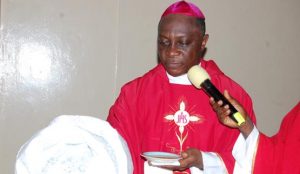 By Clara Egbogota
The Catholic Archbishop of Lagos, Most Rev. Adewale Martins, has urged the Federal Government to see the ongoing “#RevolutionNow” protest as a wake-up call to address the untold hardship Nigerians are undergoing.
Martins made the plea today, Wednesday, August 7, 2019 in Lagos while reacting to the ongoing agitations for better living conditions for Nigerians, urging the government to ensure protection of their lives and property.
He said in a statement that President Muhammadu Buhari-led administration should also see the agitations as an opportunity to directly hear the complaints of Nigerians.
According to him, this will enable the government to redouble its efforts toward fulfilling their constitutional role of securing lives and property of the people.
The archbishop expressed displeasure over the rising cases of insecurity across the country, particularly the kidnapping and killing of innocent Nigerians by armed bandits.
“Except urgent and concrete measures are taking to reassure Nigerians of safety of their lives and property across the country, things may soon get out of hands.
“People may be forced to resort to self-help, if the government and security agencies continue to fail them.
“The ongoing protests by some groups is a reflection of the growing decay in the land and should be a wake-up call for the president to be more creative and decisive in addressing various agitations bothering the minds of Nigerians.
“Clamping down on the protesters will not make the problems to disappear. Rather, I urge him, as the father of the nation, to pay attention to the issues that bother the citizens.
“The fears being expressed about the state of the nation are genuine and they deserve to be looked into urgently so as to save this nation from further distress.
“President Buhari needs to address the nation on these issues and give people the much-needed reassurance and hope.
“If this is not forthcoming, people may feel free to interpret events as they wish,” Martins said.
He said that there was need for speedy arraignment of those arrested during the protest in the court of law.
“The continuous detention of the protesters without trial may further paint the government as only paying lip service to the tenets of democracy.
“The proper and real dividend of democracy include freedom of expression and assembly, including the freedom to protest,” he said.
The archbishop, however, lauded the recent judgment of the Kaduna High Court, which granted Sheik El Zakzaky and his wife bail to travel to India for medical treatment.
He urged the Federal Government to obey the court’s judgment and other similar court judgments as evidence of its avowed commitment to the rule of law.
The cleric said that the country was ruptured and in need of healing.
He also called on the state governors to intensify efforts to work with the various law enforcement agencies as well as traditional institutions in order to curb insecurity across the nation, especially on the highways.
“The people who unleashed mayhem on travellers on the highways seem to be foreigners who allegedly infiltrated the ranks of the herdsmen.
“We urge the governors to collaborate with all necessary groups to flush out these foreigners from their territories and free the nation of their criminal activities,” Martins added. (NAN)