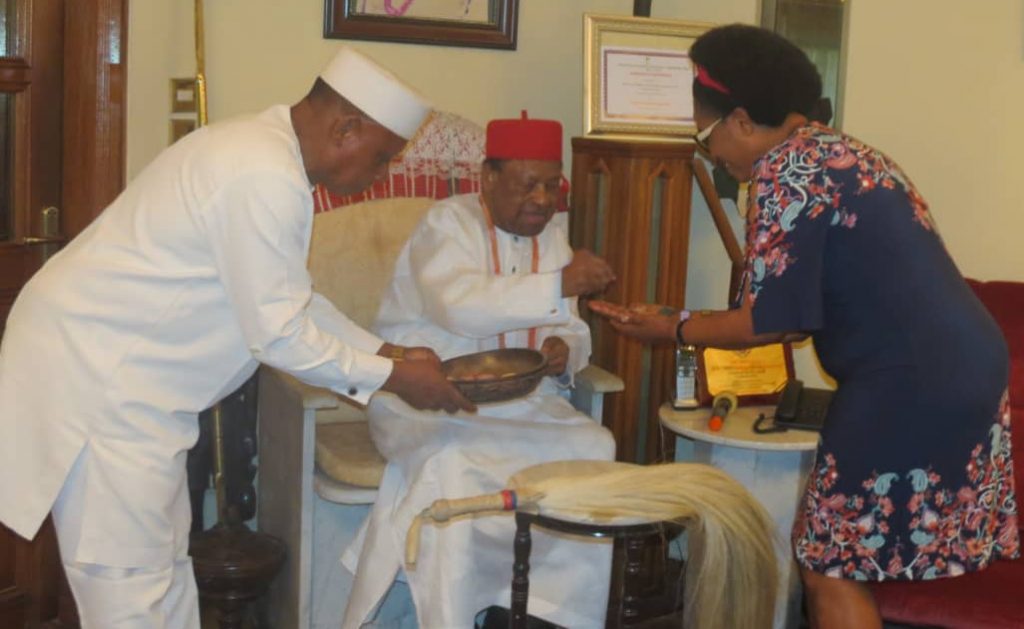 The director general of the Delta State Capital Territory Development Agency (DSCTDA), Hon. Mrs. Joan Onyemaechi Mrakpor, has pledged to make Asaba a capital city befitting of Delta State.
A statement signed by Ngozi Fortune Onwordi stated that Mrs. Mrakpor spoke while on a courtesy visit to the Asagba of Asaba, His Royal Majesty, Obi (Prof.) Chike Edozien, during which she sought the monarch’s cooperation in the task of transforming the capital territory in line with the vision of Governor Ifeanyi Okowa.
She highlighted two key areas that must be addressed to ensure accelerated growth in the state Capital Territory.

“Firstly, our people are yet to fully understand that Asaba is no longer the village it was many years ago but the capital of an oil rich state. We have to loosen up a little and embrace the challenges that accompany developmental agendas. The ‘Ogbe Mentality’ should be dropped.

“Secondly, there is challenge of managing people. Most times, the interests of an investor will not be the same with the host community’s and this has to be properly managed. In the course of doing this job of trying to build a befitting capital territory, we might step on toes. This is why we have come to seek your counsel and fatherly support,” Mrakpor stated.

Welcoming the DSCTDA boss to his palace, the traditional ruler recalled the she had been made a citizen of Asaba during the 2015 campaign period when the former House of Representative member visited his palace prior to her election.
“We have offered you citizenship of Asaba. You are now a native of Asaba. If not for the fact that you are here on official visit, you would have been sitting by my right,” the royal father said.
Obi Edozien advised the State Government to be forward looking by naming the State Capital Territory as Asaba Capital Territory despite the fact that there are other communities in the area.
“The Capital Territory should be called by its name which is Asaba. I know we may be worried about what other communities in the capital territory will say but the Government has to be forward looking. In less than 50 years from now, other communities within the capital territory will have become part of the state capital, Asaba,” he said.

He urged the government to work in tandem with the communities and the traditional institutions as it has not come to govern a virgin land.

The royal father acknowledged the projects Mrakpor attracted to his domain as a member of House of Representatives. They include the construction of a Cottage Hospital with Staff Quarters and Mortuary at Bonsac, New Asaba, reconstruction and beautification of Federal Medical Centre, Asaba and setting up of skills acquisition centre at Osadenis Mixed Secondary School, Asaba.
Others he named are installation of Mini Grid for steady electricity at Ogwa-Ukwu Ahaba and installation of 500kva transformers at some locations in Asaba among others.
The director general of DSCTDA was accompanied on the courtesy visit by some members of the board of the agency, including Ogbueshi Eluaka Adizue.