Home Christian Life Adeboye identifies why corruption is in Nigeria 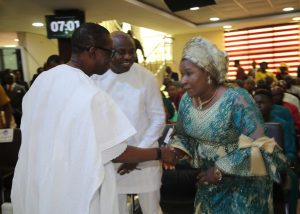 Pastor Emefienim and wife, welcoming Governor Okowa to the church service.
The absence of the fear of God among Nigerians has been identified as the reason for corruption in the country.

The General Overseer of Redeemed Christian Church of God (RCCG), Pastor Enoch Adeboye dropped the hint today while speaking at the 50th birthday thanksgiving service of Pastor Emmanuel Emefienim at the Champions cathedral, chapter of the church in Warri.

At the service that had Governor Ifeanyi Okowa of Delta state in attendance, Pastor Adeboye said that there would be no corruption in the country if everyone had the fear of God.

Urging Nigerians to focus more on matters concerning God, he said: “If we are all focusing on things of God, knowing that sooner or later we will leave, the world will be a better place.”
He said that the country would be a better place if the citizenry concentrated more in preparing for where they would spend eternity.

The cleric, therefore, urged Nigerians to focus more on matters concerning God, saying “if we are all focusing on things of God, knowing that sooner or later we will leave, the world will be a better place”.

He said that people should remember that everyone was on a journey in life and must walk in the way of the Lord because one day, there would be a return to the creator.

According to Adeboye, whether we like it or not, we are going on a journey; death is not a respecter of age. We must go on the journey, and we have no choice.

“Some of us do not know the way but, someone has shown the way by saying, I am the way, the truth and the life,’’ he stated.

He remarked that the scriptures said “teach us to number our days so that we may apply our hearts to wisdom.

“It did not say teach us to number of our days so that we will be rich; don’t seek great things for yourself, it is about wisdom, not wealth.

“If you prosper and you don’t have wisdom, the prosperity will the destroyed, and know that power corrupts, and absolute power corrupts absolutely.

“Jesus said wisdom is doing what I have thought you; wisdom is to listen to Jesus Christ, and do what He says bearing in mind the saying, ‘seek first the kingdom and everything will be added to you’’.

On his part, Okowa congratulated Emefienim for attaining 50 years of age, noting that it was a major milestone.

He described Emefienim, an Executive Director in Sterling Bank, as a “humble man who has been blessed by God and is extending the blessing to people and winning souls for God’’.

According to the governor, beyond winning souls, his church is doing a lot for our people and the government. Pastor Emefienim is showing a lot of love to people.

“Pastors should continue to impact on the less-privileged and attracting the youths to God. There is a time to reap all that you have done,” he said.

In a brief speech, Emefienim expressed gratitude to Adeboye, Okowa and others who attended the thanksgiving.
To Okowa, he said “Your Excellency, we are so proud of you; you walk your talk.”