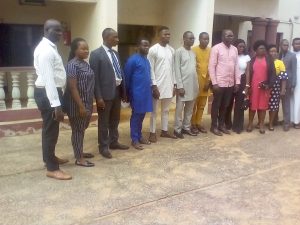 New NADESTU Executive council led by Comrade Godwin O. Saturday in a group photograph with Hon. Orishedere Sunny, the Executive Secretary of Delta State Scholarship Board and staff after the courtesy visit.

Delta state Government has cleared all arrears of bursary for students of the state origin in all higher institutions of learning in Nigeria.

The Executive Secretary of the Delta state Scholarship Board, Hon. Orishedere Sunny made this known today, Monday, September 23, 2019 when he received in audience the new executives of the National Association of Delta State Students Union (NADESTU), who came to pay him a courtesy call.

At the meeting which held in the conference hall of the State scholarship board on Anwai/Illah Road, Asaba, the Executive Secretary also noted that as at today in the country, it is only Delta state that is paying bursary to students in institutions of higher learning across the country.

Hon. Orishedere therefore, called on the students to reciprocate this gesture of Governor Ifeanyi Okowa and imbibe the culture of sincerity in making application for bursary, and avoid the unwholesome act of indulging in sharp practices of falsification of application papers.

“Today, the state government has cleared the backlog of arrears of bursary payment. The government does not owe any back log of bursary arrears. We have also realized that today, Delta state is the only state paying bursary to students in the country,” he said.
Orishedere accordingly reminded the students of the need to be sincere while applying for scholarships.

He said: “On our part, we want to tell you that the board has been having challenges with student’s sharp practices that they engage in when applying for bursary. This board is against giving false information.”

Orishedere also told the new NADESTU executives that the State Scholarship Board has achieved so much in the area of scaling down on the number of applicants for bursary. This was made possible by the sanitizing measures we have put in place.

A consequence of this is that it is no longer possible for students who are not of Delta state origin to infiltrate and apply for bursary.
Orishedere announced for the information of the students that the state government has made provisions for scholarship for first class students, as well as scholarship for Ph.D students. “There is also scholarship for children of civil servants who died while in service. We have schemes for students who study aviation,” he said.

He hinted that work is at advanced stage of getting approvals for the release of funds for the next bursary payment, pointing out that the board will keep the NADESTU executive council informed at every stage when payment of student bursary is to commence, as well as update the student body about institutions where payment has been made.

Orishedere welcomed the new Comrade Godwin O. Saturday-led NADESTU EXCO, with a call on it to create the atmosphere of cordial relationship to exist, not only with the board but with the state government.

“Agolo sees negotiation and meeting as a veritable instrument for resolving issues. With you coming on board, we hope you will also create the atmosphere of cordial relationship, not only with the board, but with the state government. We knew what it was before Agolo came in,” Oshedere remarked.

Earlier, the new NADESTU president-elect, Comrade Godwin Saturday in his speech thanked the Delta State Government for reactivating the first class scholarship awards for students of the state origin.

He said that the students want to work with the Governor Okowa administration and pledged the co-operation of his new executive council in any area necessary.

Also earlier, the outgoing NADESTU President, Comrade Samson Agolo had introduced his successor, Comrade Godwin Saturday, who then introduced members of his exco who were also present. 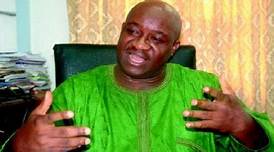